Kolkata Professor Who Said "Virgin Is Like Sealed Bottle" Removed

Kanak Sarkar, a professor of International Relations department, had likened a virgin woman to a "sealed bottle" or "packet" in a Facebook post on Sunday.

The Jadavpur University professor who triggered protests after he compared a virgin woman to a "sealed bottle" on a Facebook post has been taken off his duties. Kanak Sarkar, who taught International Relations at the university in south Kolkata, was removed after a student-teacher committee found his Facebook post offensive.

Jadavpur University Vice-Chancellor Suranjan Das criticised the professor for his misogynistic comments, saying it has "sullied" the image of the institution.

The university's Department of International Relations in a statement said they are looking for a professor to replace Mr Sarkar. The department head, Omprakash Mishra, said several allegations of misconduct also surfaced against the professor.

Here is the statement released by the university:

Jadavpur University professor Kanak Sarkar who made controversial remarks in a Facebook post has been divested of his duties with immediate effect. pic.twitter.com/OlmdshSSUI

Kanak Sarkar had likened a virgin woman to a "sealed bottle" or "packet" in a Facebook post on Sunday. He later deleted the post and justified the action in another post claiming freedom of speech.

The professor, still defiant, later said it was intended for "fun" among a group of friends on social media and "not for public consumption".

"Someone took a screenshot of the post and forwarded it, which triggered the response. I did not intend to hurt anyone's sentiment or insult any woman," he said.

In the post, he also asked if someone was willing to buy a bottle of cold drink or a packet of biscuits with a broken seal, adding, "most boys, virgin wife is like angel." 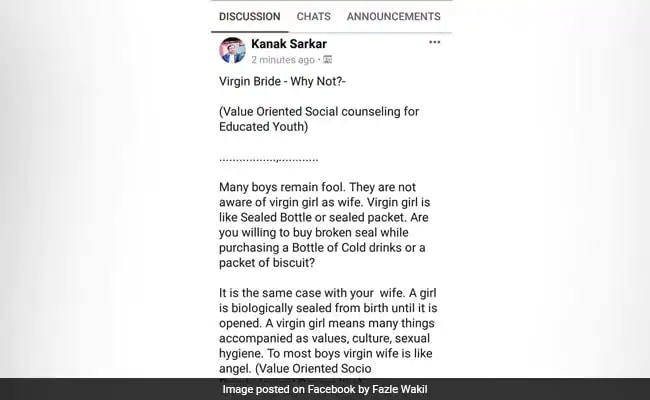 Other allegations also surfaced against the professor, which the Vice-Chancellor said he has taken note of. On Monday, a journalist alleged Kanak Sarkar once asked a girl student if she wants to become a model as her "figure" was "very model-like".

Students marched to the vice-chancellor's office yesterday and gave a letter demanding the immediate termination of Mr Sarkar's employment. They also boycotted his classes.