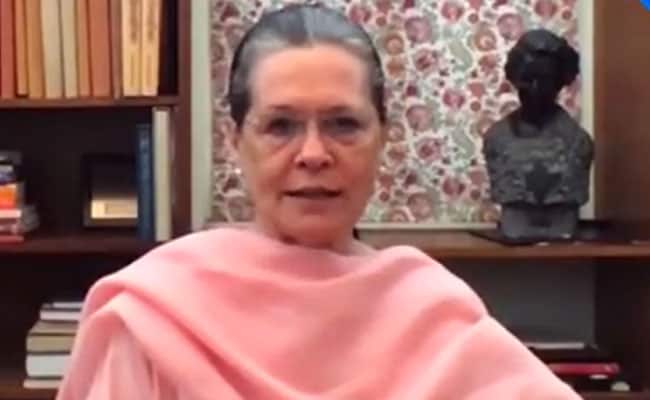 Hathras case: Sonia Gandhi said "There was an attempt to hush up the matter"

Congress president Sonia Gandhi launched a scathing attack on the Yogi Adityanath government in Uttar Pradesh Wednesday over the brutal torture and gangrape of a 20-year-old in Hathras, saying she was "killed by a ruthless government" that was trying to "hush up the matter". The state has been under huge criticism and public anger has been bubbling up over case, which has a strong caste angle.

The woman, a member of the Scheduled Castes, had died on Tuesday at a Delhi hospital after fighting for her life for two weeks.  Half strangled, bearing multiple fractures, tongue gashed, naked, bleeding and paralysed, she was left for dead in a field where she had gone to cut grass for fodder on the morning of September 14.

Her body was cremated by the Uttar Pradesh police in the middle of the night. Her grieving family was kept locked up despite their pleas.

In a video statement posted on the Congress's official Twitter handle this evening, Sonia Gandhi said: "There was an attempt to hush up the matter. The girl was not given timely treatment and a daughter is no longer among us. I want to say that Hathras' Nirbhaya has not died, she has been killed -- by a ruthless government, by its administration and by the UP government's ignorance."

"When she was alive, she was not heard, she was not protected, and after her death she was deprived of her home. She was not handed over to her family and a crying mother was not even given the chance to bid goodbye to her daughter. This is a big sin," Mrs Gandhi said.

Accusing the state police of "forcible" cremation, she said the young woman was robbed of dignity even in her death and was "cremated like an orphan".

Priyanka Gandhi Vadra has demanded that Chief Minister Yogi Adityanath resign his post. "Instead of protecting the victim and her family, your government became complicit in depriving her of every single human right, even in death. You have no moral right to continue as Chief Minister," she tweeted.

"All this is a shameful move of the UP government to suppress Dalits and show them their 'place' in the society. Our fight is against this hateful thinking," Rahul Gandhi said in a Hindi tweet.