A Lakshadweep lawyer had filed a PIL against Administrator Praful Khoda Patel's controversial move to ban meat in schools and shut down dairy farms. 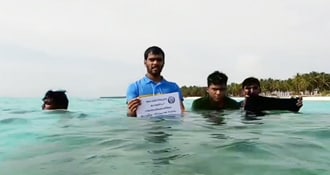 Lakshadweep has been up in arms against several changes brought about by Praful Khoda Patel.

The Kerala High Court today stayed two major measures of "reform" introduced recently in Lakshadweep by the Union Territory's new Administrator Praful Khoda Patel: removal of chicken, beef, and other meat from the island group's school menu and closing down of dairy farms. The order followed a plea alleging that these decisions were based on a "hidden and mischievous personal agenda" and violated the islanders' rights.

Other such sweeping changes brought in by Mr Khoda's regime have, in recent months, set off a wave of anger in the island group, besides in neighbouring Kerala.

The first major set back to Praful Patel, autocratic Administrator of Lakshadweep: Kerala HC stays arbitrary and discriminatory orders closing down dairy farms and banning meat from diet of school children. His controversial other actions are also being challenged in the court.

The court stated that no further action should be taken on these two specific decisions -- the meat ban and closing down of dairy farms -- until a counter-affidavit was filed by the Union government.

It must be noted here that unlike chicken and beef, fish and eggs were not on the list of items barred.

Lakshadweep Collector S Asker Ali had, in May, said: "During monsoon it is hard to transport chicken from outside. And if children's requirements are met locally through egg and fish, I don't see a problem."

The court's order today came based on a public interest litigation filed by Ajmal Ahmed R, an advocate at the Kerala High Court and an executive member of the Lakshadweep Bar Association. His plea will be considered again next week.

"The officials are literally using this situation (lockdown) as a means to implement the irrational reforms, which are totally against the interest of Lakshadweep and Islanders therein. The Administrator is attempting to impose his hidden and mischievous personal agenda...in blatant violation of Article 15, 16, 19, 21, and 300A of Constitution of India," Mr Ahmed's petition stated.

Referring to the meat ban, the petitioner told the court that chicken and other meat items have been on the menu in Lakshadweep's schools "from its inception". Calling the Administrator's intervention "ill-motivated" and alleging a "hidden agenda", Mr Ahmed's plea said there was no deliberation or consultation before changing the school menu.

"…preparations are going on to entrust…mid-day meals to non-governmental organisation Akshayapatra, having an office in Bengaluru," he said.

The advocate alleged that closing down farms, including those owned by the Department of Animal Husbandry, makes way for the implementation of the proposed Animal Preservation (Regulation), 2021, which bans slaughter of the cow, calves, and bulls.

With such a move, he said, milk products would become scarce in the islands, compelling people to import them from Gujarat.

"This is nothing but interfering with the right to choose the food habit of the island people, which is against the right enshrined under the Constitution of India," the plea said.

Lakshadweep has been on the boil for a while over several controversial moves by Mr Patel, who took charge on December 5 last year.

Some of his other moves that have fueled discontent in the Muslim-majority islands include the demolition of fishermen's sheds in coastal areas and revoking restrictions on alcohol consumption.

His administration's draft Lakshadweep Development Authority Regulation also proposes changes in land laws, allowing authorities to take over any property for development activities such as building, engineering, and mining & quarrying.

Besides the Congress, the CPM, DMK, and other parties, scores of members of the BJP in the island group, have protested against these measures. The protests have echoed in Kerala, too, with Chief Minister Pinarayi Vijayan demanding Mr Patel's recall.