KK Shailaja, who won global recognition for her effective intervention in containing the pandemic in the state in the initial phase of the virus outbreak, had on Monday indicated that she would get vaccinated soon. 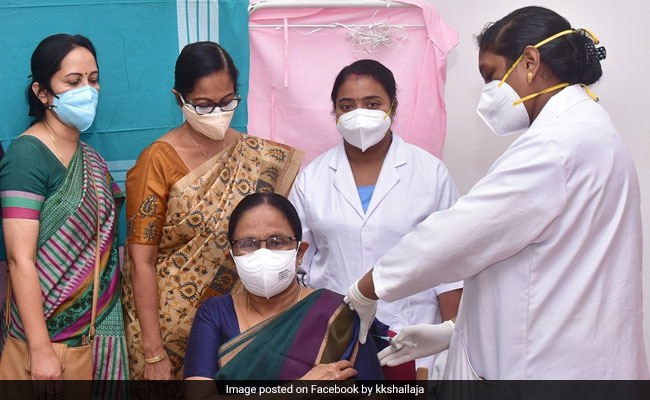 KK Shailaja appealed to everyone to take part in the government programme.

Kerala Health Minister KK Shailaja on Tuesday received the first dose of the COVID-19 vaccine at the government medical college hospital
here as the second phase of the vaccination drive progressed in the State.

The 64-year-old minister later appealed to everyone to take part in the government programme.

Besides KK Shailaja, her cabinet colleague E Chandrasekharan also received the jab from the same hospital.

Earlier, Minister of Ports and Museums, Kadannappally Ramachandran (76) got the shot from a hospital in his home district, Kannur.

Chief Minister Pinarayi Vijayan and his other cabinet colleagues, belonging to the prescribed age group targeted in the second phase, are also expected to take the vaccine in the coming days.

KK Shailaja, who won global recognition for her effective intervention in containing the pandemic in the state in the initial phase of the virus outbreak, had on Monday indicated that she would get vaccinated soon.

The minister had also said she wanted to receive the vaccine much earlier to alleviate concerns among people.

But, she decided to wait as there was a suggestion during the Prime Minister's meeting that people's representatives need not take the vaccine along with health workers and they can do it when their turn comes, the minister had said.

Meanwhile, Health Department sources here said the response of people towards the second phase vaccination drive was overwhelming and the number of those who turned up to take the shot in the state-run hospitals on the first day was much more than they expected.

However, a state-wide tally of the recipients of the vaccine was not yet available, the sources added.

The second phase targets anyone over 60 and those aged between 45-59 who have comorbidities.

They can receive vaccine shots for free at government hospitals and for a charge at private hospitals, as per the Centre's directive.