"Had Sent Speeding Alerts To Bus Owner": Kerala Government On Crash That Killed 9

High Court say "accident of this nature should never happen again" and, for that, action be taken, "not merely excuses or explanations" 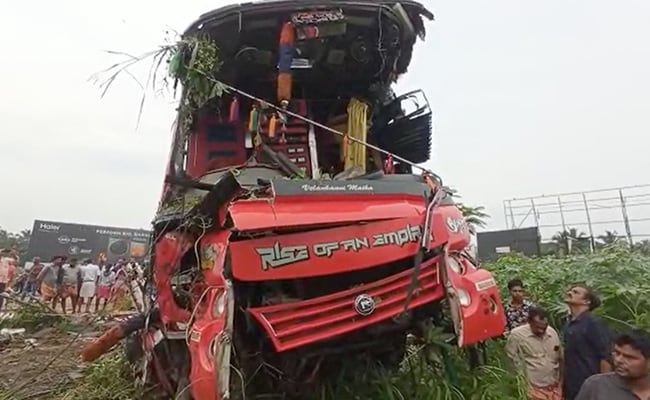 Five students were among those killed in crash on October 6.

A day after a bus accident took the lives of nine including five students, the Kerala High Court on Friday batted for a change in the "road culture". The nine were killed and over 40 others injured on Wednesday after a private tourist bus hit the rear-end of a government bus.

The government told the court that the Motor Vehicles Department had sent two alerts to the mobile phone of the owner with regard to speeding. "This bus was blacklisted for five offences," the Transport Commissioner told the court. He said there are GPS systems for the public carriages and out of the around 8.35 lakh vehicles, only 2.5 lakh have installed it.

Justice Devan Ramachandran, who had intervened in the matter had sought a report from the police and the Motor Vehicles Department, today said it was "heartbreaking" to listen to the news of the accident.

State Transport Commissioner S Sreejith, who is also the State Road Safety Commissioner, appeared before the court and submitted the various aspects and issues faced by the respective departments.

The court noted that even though the Motor Vehicles Department (MVD) was booking a large number of violations every day, it was not resulting in any tangible results on the streets. "It does not seem to create a tangible result on the streets because presumably even the offenders continue to do so being aware or being under the presumption that the consequences are trifle," the court said.

Justice Ramachandran asked the Transport Commissioner to take stern action through the MVD officers by sending a strict message to all the drivers in the State that "recklessness and carelessness will not be tolerated and they will be accountable to the law".

"The road culture that we are now used to certainly has to change and this may have to be done through a clarion call to be done by the authorities who are vested with the powers... that recklessness on the wheel and the proclivity to violate the law will never be tolerated and will be dealt with the highest order of the law...," the court said.

"An accident of this nature should never happen again and for this action is pre-requisite and not merely excuses or explanations," the court said.

Various members of the bar also recounted their experiences in the city and the highway about their encounter with the recklessness of the drivers handling transport and and contract carriers.

Justice Ramachandran mentioned the reckless driving of the private bus drivers across the State.

The court posted the matter for further hearing on October 28 and instructed the Transport Commissioner to submit the suggestions to make the roads and the streets safe.

The court asked the Transport Commissioner also to ensure that lane discipline was enforced.

"Lane discipline should be ensured and the left track should be kept for the heavy vehicles. On single-lane roads, the MVD should ensure that drivers are not reckless," the court said.

He submitted also before the court that 726 Artificial Intelligence cameras would soon start functioning across the State to catch the traffic offenders. He said to monitor the 1.67 crore vehicles in the State, there are only 368 MVD officers.

On Wednesday, the tourist vehicle was driven at a high speed, over 97 km per hour, and the accident happened while the driver attempted to overtake a car, State Transport Minister Antony Raju had said yesterday.

According to police, of the five students, who died, three were girls. All the deceased were aged between 15 and 17 years. More than 40 people were injured in the accident that occurred at Vadakkencherry in Palakkad district.