In Assam's Kaziranga, A Tiger Takes Shelter From Monsoon In A Goat Shed

The "royal" visit comes almost exactly a year after another tiger, also trying to escape rising flood waters, was spotted resting on a bed inside a house near the park

There are around 118 tigers in Kaziranga National Park, according to the last census

A Royal Bengal Tiger took shelter in a goat shed in a village on the fringes of Assam's Kaziranga National Park on Monday, as flood waters inundated large sections of the reserve and forced wildlife either to move to high ground or stray outside its boundaries.

The "royal" visit comes almost exactly a year after another tiger, also trying to escape rising flood waters, was spotted resting on a bed inside a house near the park.

Over 95 per cent of The Kaziranga National Park, a 430 square kilometre jungle that is home to tigers, elephants and the endangered Indian rhinoceros, has been flooded by rains.

A 15-second video of the tiger that sought shelter in a goat shed shows the shed all but underwater. As the water level rises, the tiger is barely visible - only its head and rear are above the water.

"A sub-adult tiger entered a goat shed in Kandolimari Village (Agartoli Range) to escape the flood. Utmost care is being taken to ensure safety of both people and the tiger," the Kaziranga National Park and Tiger Reserve tweeted.

"All efforts are being made to rescue the tiger," P Sivakumar, the director of the park, said.

A committee has been constituted to monitor the situation on a regular basis. 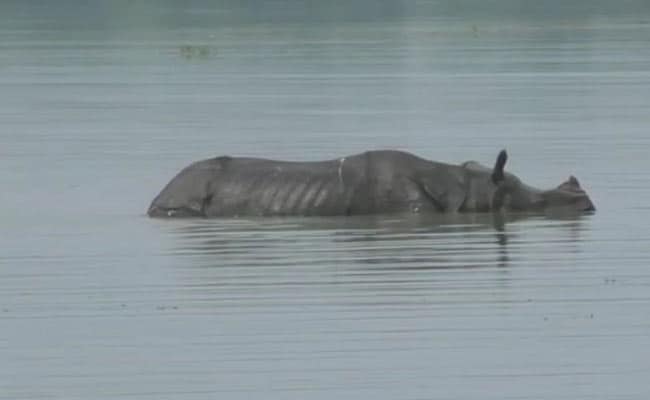 95 per cent of Kaziranga National Park has been flooded

Earlier this season another tiger was rescued from the floods and released in a dryer section of the park.

Kaziranga has around 118 tigers, according to the latest census.

The tiger last year that strayed into the house last year was rescued by the WTI (Wildlife Trust of India) working with Assam forest officials.

The magnificent animal quickly became a hero on social media and was dubbed "the unusual guest".
Meanwhile, incessant rain has flooded 166 of 223 forest camps in the park, of which seven had to be vacated. Seventy animals have had to be rescued, with a further 47 found dead.

Forty-one of those 47 were hog deer.