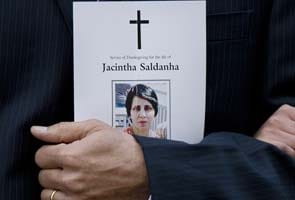 Shirva: Family and friends of the nurse who was found hanging after taking a hoax call to the hospital treating Prince William's wife prepared for her funeral on Monday in a small town in southwest India.

Indian-born 46-year-old Jacintha Saldanha reportedly committed suicide after answering the telephone call from two Australian radio DJs to the hospital where the pregnant Duchess of Cambridge was admitted with acute morning sickness.

Saldanha's body was flown back from Britain on Sunday and was due to be buried at a cemetery in Shirva, 30 miles (50 kilometres) from Mangalore city, after a funeral in the Catholic parish church.

The coffin will first be taken to her mother-in-law's house for prayers and will then be presented in the Our Lady of the Health church for local people to pay their respects, with a large turnout expected.

Members of the nearby Nativity Convent told AFP that the community was saddened and confused by the death of Saldanha, who moved to Britain about 12 years ago with her husband Benedict Barboza.

"They say she was a strong person, why did she take such a drastic step," said Sister Benny D'Souza, describing the family as "very generous and kind".

Sister Jyoti, who gave only one name, said Saldanha's mother-in-law was especially close to the nurse and was heartbroken by the news.

"It was a shock for us because she was a lovely person to all," the sister said.

Barboza and the couple's son and daughter, aged 16 and 14, were due to attend the funeral, having arrived from Britain with the body after a memorial mass in London's Westminster Cathedral.

Shirva is Barboza's home town, while several of Saldanha's relatives, including her frail mother, live in the port city of Mangalore.

A family source told AFP that the body was kept in a mortuary overnight before being taken to Shirva.

Workers in the church cemetery began digging a grave for Saldanha on Sunday, marked with a simple black-and-white cross bearing her name and dates of her birth and death.

Family members in the town were unwilling to speak to reporters after a week of intense media scrutiny following the news of her death.

One local journalist, who declined to be named, said people identified with the family as many workers leave the area to take jobs in Britain or the Gulf countries as nurses, engineers and mechanics, often sending most of their wages home.

"People are curious about it and they want to know what happened," he said.

John Rodrigues, who returned to Shirva after working in the oil and gas sector in the Middle East, said there was still "a lot of confusion in people's minds over how she died".

A London inquest last week heard that Saldanha had been found hanged in staff accommodation on December 7 and that there were no suspicious circumstances over her death.

A few days earlier the nurse put the hoax call through to a colleague who relayed confidential details about the health of Prince William's wife Catherine to the Australian DJs.

Saldanha left three notes, one of which reportedly criticised colleagues over her treatment at the King Edward VII private hospital after the hoax call.

The hospital has defended itself, saying it offered support to Saldanha and had stressed to her she would not be disciplined for being taken in by what it described as a "cruel trick".

Australian police say death threats have been made against Michael Christian and Mel Greig, the DJs from Sydney's 2Day FM radio station who made the call posing as Queen Elizabeth II and William's father Prince Charles.

Promoted
Listen to the latest songs, only on JioSaavn.com
The presenters made tearful apologies last week.