"Absolutely no protests will be allowed. Maybe when the situation further improves, we will see. But not as of now," Jammu and Kashmir police chief Dilbagh Singh told NDTV. 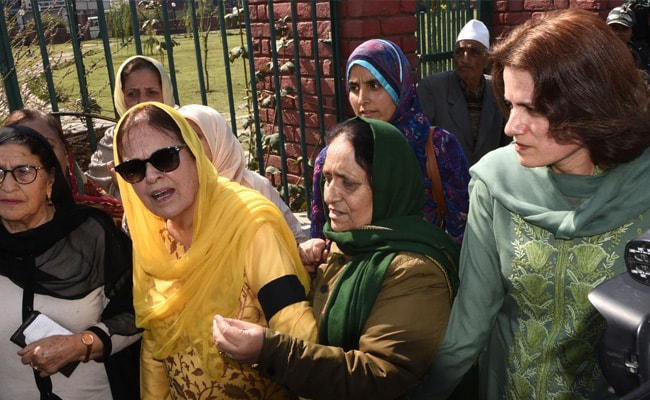 Farooq Abdullah's daughter and sister were among those arrested and released this week.

No protests of any form, including sit-ins, will be allowed in Kashmir till the situation improves and the restrictions in the Kashmir Valley are completely lifted, the police said.

On Tuesday, over a dozen women, including former Jammu and Kashmir Chief Minister Farooq Abdullah's sister and daughter were arrested for holding a sit-in in Srinagar against the ending of the state's special status. The women academicians and activists, most of them aged between 60 and 80 years, were released on Thursday after furnishing personal bonds.

"Our effort would be to stablise peace further before any such activity is allowed," Jammu and Kashmir police chief Dilbagh Singh told NDTV.

He said some placards carried by women were not "very good" and that they certainly had law and order implications, and therefore, "effective action had to be taken".

Women carrying placards had gathered at the Pratap Park near Srinagar's Lal Chowk for a peaceful sit-in. As they started protesting, the police swooped in on them and took a dozen women into preventive custody. They were taken to a nearby police station and later sent to judicial custody.

Mr Singh said the fact that the restrictions were in place in Srinagar should be respected. He said women protesters were advised to go to the deputy commission and seek permission.

"Absolutely no protests will be allowed. Maybe when the situation further improves, we will see. But not as of now," Mr Singh said.

The women had gathered for the protest a day after postpaid mobile services on all networks in Kashmir were restored on Monday, 72 days after mobile and internet communications were blocked in the Kashmir Valley by the government.

Hundreds of political leaders of the state - including former Chief Ministers Farooq Abdullah, his son Omar Abdullah, as well as Mehbooba Mufti - have been placed under detention or house arrest since August as the government announced its move to end special status granted to the state under the Article 370 of the constitution and split it into two union territories.

Farooq Abdullah, 83, who had been detained at his home in Srinagar was placed under house arrest and charged under the Public Safety Act (PSA), a stringent law that enables detention without trial for three to six months.