Prime Minister Narendra Modi interacts with Karnataka BJP leaders, including the party's candidates for the May 12 assembly polls, elected members and office-bearers, through his mobile application NaMo. 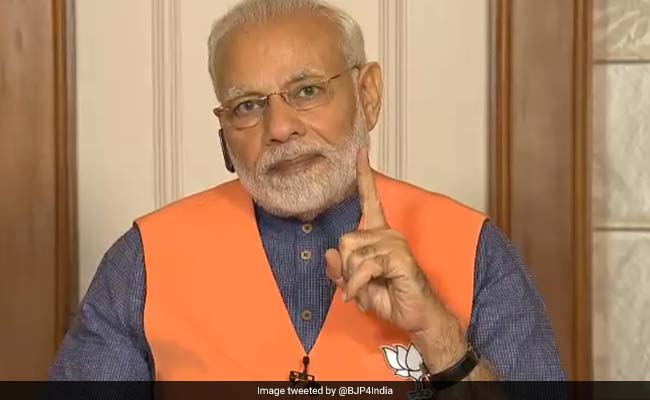 PM Modi will also start his campaign in the Karnataka from May 1.

New Delhi: Ahead of the Karnataka assembly elections, Prime Minister Narendra Modi interacted with candidates, office bearers and elected representatives in the state, which was broadcast live on his NaMo app. The BJP is celebrating the #NammaManeBJPMane campaign, under which party workers will raise the party flag atop their houses.

During the interaction today, the Prime Minister criticised those who contested elections using the issues of religion and caste. PM Modi said the BJP is following a three-pronged agenda for Karnataka's development -- development, fast-paced development, and all round development.

Karnataka is the only south Indian state where the BJP has formed government and ruled for a full term. The party is putting up a tough fight to wrest power from the state's ruling Congress.

The Prime Minister -- who will leading the charge along with the party's presumptive Chief Minister BS Yeddyurappa -- will begin campaign in the state from May 1 and is expected to address around 20  rallies, party sources said.

Here are the highlights of PM Modi's interaction with his party workers:

Apr 26, 2018 10:28 (IST)
11 children killed as train hits school bus in Uttar Pradesh's Kushinagar
PM Narendra Modi says he is extremely saddened on hearing about the death of 11 school students in a collision between a school van and a train in Uttar Pradesh. Uttar Pradesh government and railway department will take appropriate action.
Apr 26, 2018 10:21 (IST)
''Need support to add pace to development works in Karnataka''
Had the local state government not indulged in petty politics, had they extended full cooperation, we could have achieved even better figures. I want to add more pace to our development works in Karnataka. I need your support for this to happen says Prime Minister Narendra Modi.
Apr 26, 2018 10:02 (IST)
Road Construction: NDA Vs UPA
In Karnataka, close to Rs 14000 cr of road works are under progress. It will serve good fortunes for Karnataka for a century. While we constructed 1750 Km of highways in 4 years, for Karnataka, UPA had only built half of this says PM Modi.
Apr 26, 2018 09:53 (IST)
PM Modi says all the karyakartas of BJP need to connect with the voters in Karnataka
Apr 26, 2018 09:48 (IST)
Congress has resorted to rampant lying after a series of defeats in elections. In such circumstances, karyakartas must stand their ground, expose their lies and also fight their means of deceiving people by hiring foreign agencies says PM Narendra Modi.
Apr 26, 2018 09:40 (IST)
Prime Minister Narendra Modi says, "The well-wisher of the Congress party are propagating falsehood and talking about hung assembly."
Apr 26, 2018 09:38 (IST)
Toilet Construction - UPA Vs NDA
In 4 years of UPA, only 20 lakh household toilets were built with Rs 350 crore, whereas in 4 years of NDA 34 lakh toilets were built with Rs 2,100 crore.
Apr 26, 2018 09:34 (IST)
BJP claims, over nine lakh free LPG connections were also given under Ujjwala Yojana.

Apr 26, 2018 09:31 (IST)
Renewable energy commitment -  Congress Vs BJP
In four years Congress achieved 2,000 MW, while the BJP managed 7,800 MW. In solar energy, they managed only 31 MW, while the BJP managed 4,800 MW in the same time says PM Narendra Modi.
Apr 26, 2018 09:28 (IST)
We hear and see things that might discourage us, others might misuse data and involve foreign agencies and take wrong methods just to win, but not us. We should not let that bother us. We must be motivated and focused and live up to the people's expectations with our hard work and honesty: PM Modi
Apr 26, 2018 09:26 (IST)
PM Modi says, "The Congress does not walk the talk, they do deliver on the ground. They do not care for development. In 4 years the Congress has spent less than 400 crores (380 crores). Compare that to what the BJP did. We did over 1600 crores towards infrastructure development."

Apr 26, 2018 09:23 (IST)
He says development works worth Rs 14,000 crore are in progress in Karnataka.
Apr 26, 2018 09:23 (IST)
PM Modi talks of last few elections and says, "If you analyse last few elections, you will realise how few political parties have indulged only in dividing societies on religious lines. They exploit emotions of some community before elections and forget them after the elections."
Apr 26, 2018 09:20 (IST)
Prime Minister Narendra Modi went on to say, "other political parties hesitate to talk on development because development can be quantified. This was unacceptable to those parties which only concentrated on division. We govern and also fight elections based only on development model."
Apr 26, 2018 09:18 (IST)
Prime Minister Narendra Modi says, "We want to win elections on the issue of development, based on the strength of the organization and winning the confidence of people of Karnataka. We don't want to win elections by misleading the public".
Apr 26, 2018 09:17 (IST)
He goes on to say the Indian politics culture is associated with the misdeeds of the mainstream Congress and the Congress sin. The country's politics may not be purification unless the country karavaege free from the congressman's culture. 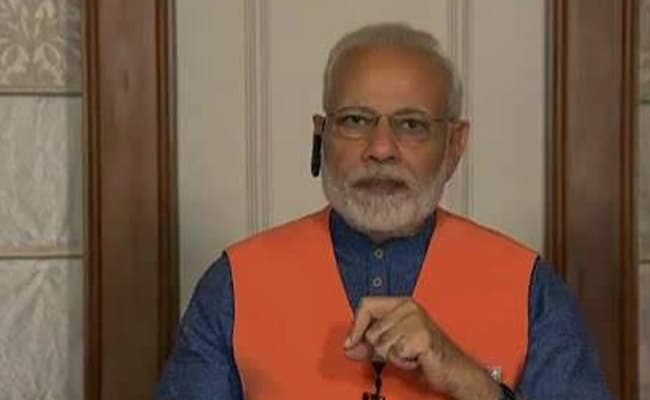