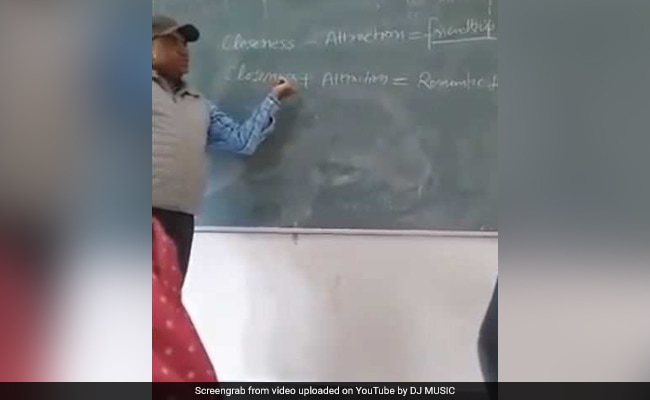 The students are seen laughing while the professor explains each formula

A Mathematics professor at a women's college in Haryana's Karnal was suspended after he taught a class 'formulae of love'. A student recorded the class on camera and showed it to the principal following which the professor, Charan Singh, submitted a written apology to the students. The professor was subsequently suspended. The video has been widely circulated on social media.

In the video, the Mr Singh is seen writing three formulae on the blackboard. The first was "closeness - attraction = friendship", "closeness + attraction = romantic love" and the last of his formulae being "attraction - closeness = crush".

The professor is seen teaching the formulae in Hindi with fervour to the students explaining each word to the girls. Mr Singh also goes on to say how attraction dies down between husband and wife in old age and they become friends.

The students are seen laughing while the professor goes on explaining each formula and are even heard saying "yes" to the explanation. Watch the video here:

The professor was on special deputation for only six months at the government women's college.