On Labour Day, we have gathered for a peaceful protest. We did not get our salaries for two months. Our mediclaim policy had also lapsed, one of the jet Airways employee said. 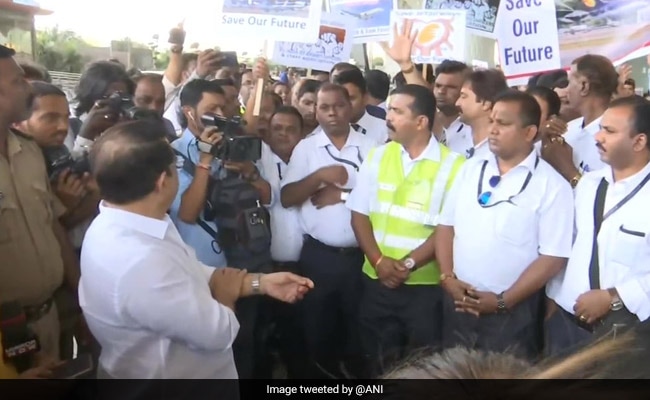 On Labour Day, the Jet Airways employees also organised a peaceful protest and requested the government's interference to save the airline.

Krishna Rama Naidu, an employee in the cargo department of Jet Airways said, "On Labour Day, we have gathered for a peaceful protest. We did not get our salaries for two months. Our mediclaim policy had also lapsed."

In a letter, Rahul Taneja, an officer with the Jet Airways, on Tuesday said, "In the absence of any emergency funding from the lenders or any other source of funds forthcoming in the near future, we find ourselves facing a situation where we are not able to fund the premium of our group mediclaim policy. The group mediclaim policy lapses on the midnight of April 30, 2019."

Sushma Shetty, who has been associated with the airline carrier for 11 years, also sought government's interference. "We are doing peace march to request the government to save the Jet Airways and the families of 22,000 staff. A staff member also attempted to commit suicide," she said.

Last week, a senior technician with the Jet Airways allegedly committed suicide in Maharashtra. While the police say he had depression as he was suffering from cancer, the functionaries of Jet Airways Staff and Employees Association, claimed that Mr Singh was facing "financial constraints" as employees of the grounded airline have not got salaries for a long time.

Jet Airways, on April 17, cancelled all flights, including its international flights temporarily, after failing to secure emergency funds from its lenders, according to a statement by the airlines.