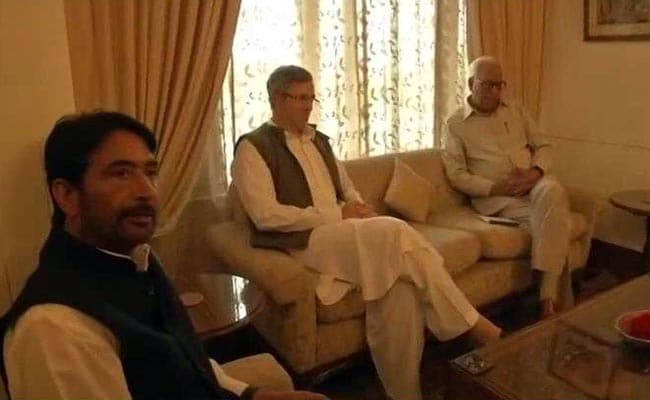 Srinagar: Two days after central rule was imposed in Jammu and Kashmir, Governor NN Vohra met leaders of all political parties in the state in an attempt to build consensus over how to deal with the overall security situation.

The state was placed under Governor's Rule on Wednesday, a day after the BJP junked its three-year-old alliance with the PDP, citing 'deteriorating security situation'.

Sources say the meeting that lasted over two hours had two broad things on the table --- how to deal with street protests and clashes between security forces and civilians, and to clear questions over why the assembly was put under suspended animation.

Mr Abdullah has already questioned why the assembly was not dissolved when no single party has a majority and all the major players saying no to any possible alliance. The BJP may have ruled out allying with any other party but Mr Abdullah says not dissolving the assembly could encourage horse trading.

There was a spike in violence in the valley during the month-long unilateral ceasefire declared by the centre during the holy month of Ramzan, after which operations against terrorists resumed on Sunday.

Four terrorists were killed in an encounter today in Anantnag, an operation that also led to the deaths of a policeman and a civilian in whose house the terrorists were hiding.

Promoted
Listen to the latest songs, only on JioSaavn.com
Earlier this week, Mr Vohra met top administrative and police officials to review the security scenario and ways to deal with it. Sources say security personnel have been asked to exercise restraint while dealing with civilian protests in an attempt to prevent any collateral damage that may worsen the situation further.

With the annual Amarnath Yatra beginning on June 28, security is top priority. Mr Vohra, who has held the post for 10 years and was due to demit office later this week, is expected to continue till the yatra ends in August.