Venkaiah Naidu also released a commemorative coin and a postage stamp to mark the centenary. 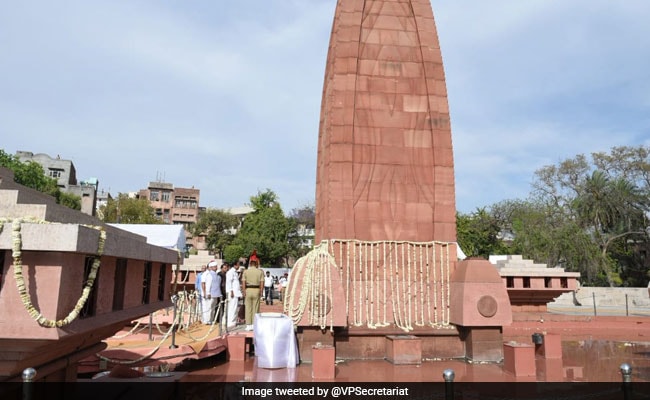 The massacre took place at Jallianwala Bagh in Amritsar during the Baisakhi festival on April 13, 1919, when troops of the British Indian Army under the command of Colonel Reginald Dyer opened fire at a crowd of people holding a pro-independence demonstration, leaving several dead and scores injured.

The commemoration ceremony was organised by the Ministry of Culture.

Mr Naidu paid his respects by placing a wreath on the memorial and listened hymns being sung by Sikh priests at Jallianwala Bagh stage, an official said, adding the vice-president also released a commemorative coin and a postage stamp to mark the centenary.

He was appraised about the proposed works for revitalization of the memorial and watched a power-point presentation regarding it.

"This place and the centenary commemoration ceremony evoke in me a deep sense of sadness at the tragic loss of human lives and also a profound sense of legitimate pride at the lasting legacy of conviction and courage that these brave soldiers of Indian freedom movement have bequeathed to us."

"May the legacy inspire every Indian to achieve greater heights of resolute resistance to oppression and exploitation.  May the indelible scars on national consciousness foster a sense of national pride along with a redoubled dedication to spread India's timeless message of peaceful co-existence across the globe," he also wrote.

The vice-president later tweeted that Jallianwala Bagh massacre was a reminder to each one of us as to how hard won and precious our freedom is.

"History is not a mere chronicle of events. It shows us the depths to which depraved minds can plunge and cautions us to learn from the past. It also tells us that the power of evil is transient," he said.

Mr Naidu called on the countrymen to draw lessons from history and work to shape a better future.

He also spoke about the need for the world community to come together to promote everlasting peace in all the corners of the globe and ensure that sustainable development of the planet becomes the watchword at all times and at all levels from schools to summits of global leaders.

The vice-president also visited a photo exhibition at Jallianwala Bagh showcasing 45 panels dedicated to the massacre, including excerpts from the newspapers of the time, letters of Mahatma Gandhi, Rabindranath Tagore and other prominent leaders.

Kala Jathedi, Delhi Gangster Wanted In Many Cases, Arrested In UP