The earlier AIADMK regime in the state had taken over the Poes Garden house and converted the building into a memorial, without consulting Jayalalithaa's family.

Deepa Jayakumar, the niece of late chief minister of Tamil Nadu J Jayalalithaa, took possession of her aunt's Poes Garden residence on Friday evening after the Chennai district administration handed over the keys to her.

"This is the first time I am visiting in the absence of my aunt. The house looks barren and empty now. The furniture used by my aunt has been removed," Ms Deepa said, expressing her interest in living at her aunt's house.

The keys were handed over to her after a single-judge bench of the Madras High Court on November 24 paved the way by setting aside the order to acquire Veda Nilayam, the residence of Jayalalithaa, and ordering that it be handed over to the legal heirs. 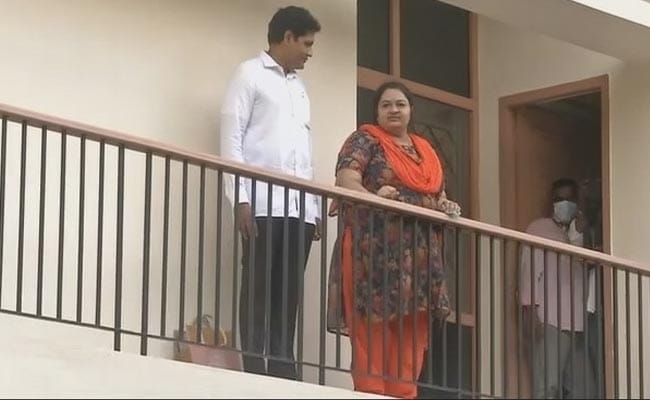 The earlier AIADMK regime in the state had taken over the house and converted the building into a memorial, without consulting Jayalalithaa's family.

The court's decision came after petitions were filed by Ms Deepa and her brother Deepak, challenging the acquisition of the bungalow by the previous AIADMK government. The Madras High Court had ruled that the property should go to them and also asked the state government to take back the compensation cash it had deposited in the court payable to the family.

In its order, the court ruled that the takeover by the government was illegal and said, "There is no public interest in this acquisition... there is already an 80 crore memorial for Jayalalithaa along the Marina (beach) a few kilometers away. What's the inspirational story that Veda Nilayam may provide which the 80 crore Marina memorial doesn't?"

The AIADMK has said that the party would challenge the order.

On Friday, Ms Deepa -- accompanied by her husband Madhavan and well-wishers -- garlanded the portrait of the late chief minister and paid floral tributes.