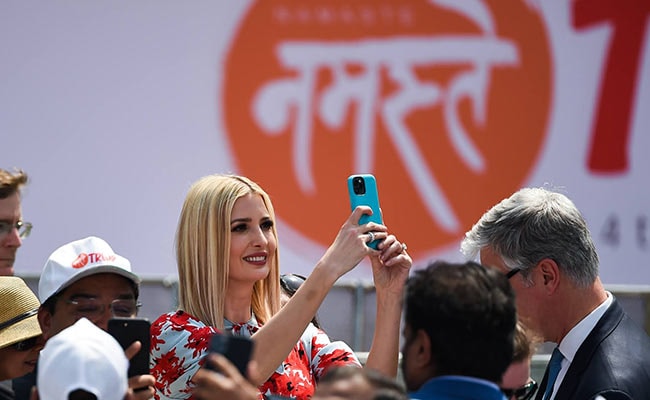 On being asked by ANI if she enjoyed the event, where Prime Minister Narendra Modi and President Donald Trump addressed the mammoth gathering, Ivanka said, "Spectacular".

President Trump, who is on a two-day visit with his family-First Lady Melania Trump, daughter Ivanka Trump and son-in-law Jared Kushner, received grand welcome following his arrival at the stadium.

The bonhomie between the two world leaders was displayed once again when PM Modi hugged President Trump at the stadium.

The ''Namaste Trump'' event was based on the lines of the ''Howdy Modi'' programme that was addressed by Narendra Modi and Trump during the Prime Minister's trip to Houston last September.

He and Prime Minister Modi were treated to a glittering and mesmerising performance by artists, who exhibited the essence of India's diversity.

Trump began his speech, full of praises with India, by greeting the crowd with a ''Namaste''.

The US President also said that five months ago America welcomed the "great Prime Minister" at a giant football stadium in Texas and today India welcomed him at the world's largest cricket stadium in Ahmedabad.