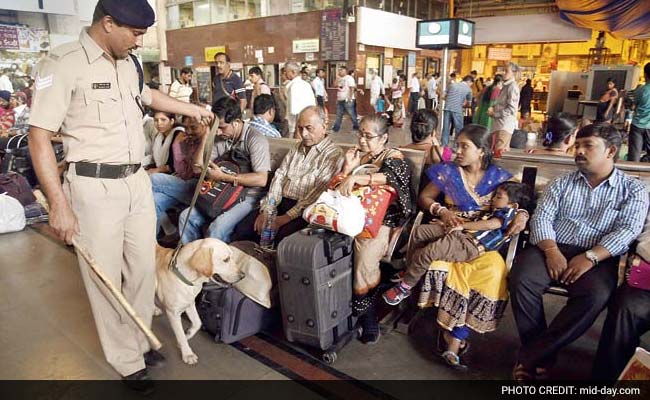 File Photo: A railway protection force officer along with a sniffer dog checks the baggage at CST on November 14, 2015 after a terror alert. ATS units across Maharashtra and railway authorities have been asked to take necessary precautions.

Mumbai: A threat alert from Delhi has placed anti-terror agencies in Maharashtra on their toes. An e-mail allegedly sent on behalf of the Islamic State of Iraq and Syria (ISIS) stated that the terror group would blow up trains leaving Delhi for other stations including Mumbai in the next 72 hours.

Mumbai, Delhi and Kanpur have been put on high alert after the threat. The e-mail also said that the blast would occur between Kanpur and Delhi stations.

The Maharashtra ATS was alerted by a central agency on Saturday. It said, "An e-mail on behalf of ISIS is received. Mumbai is put on high alert along with Delhi and Kanpur. The mail said that several blasts would take place in express trains leaving from Delhi to other places including Mumbai." It mentioned the names of few express trains that include Rajdhani, Shatabdi, Duronto, Sampark Kranti and Vaishali Express.

ATS units across Maharashtra and railway authorities have been asked to take necessary precautions.

A police officer from Railways said, "We were notified by the ATS in the wee hours of Sunday. Extra patrolling and checking is being done inside express and mail trains. We are also conducting security checks at all railway stations. All cops have been asked to stay alert."

Nakabandi to continue
The Mumbai police too are not taking the threat lightly, and have placed nakabandis across the city. A police officer said, "We are carrying out nakabandi at several entry and exit points of Mumbai. We are checking documents and IDs of people as well."