Is India Winning The Coronavirus War? The 'R' Factor

The 'R', or the Reproduction Rate, measures how infectious the coronavirus is - put simply, it is a measure of how many people are infected by one infected person.

The coronavirus attacks different regions of a country with differing intensity.

Using the 'R' rate, we look at which states in India are winning or losing the Indo-Coronavirus war.

The 'R', or the Reproduction Rate, measures how infectious the coronavirus is - put simply, it is a measure of how many people are infected by one infected person. If 'R' is 2.0, it indicates that one person who is infected with COVID-19 will on average infect another two people. Those two persons will each go on to infect another two persons - and so the infection spreads exponentially in society resulting in a pandemic.

It is crucially important to ensure 'R' falls below 1.0 (that is, one infected person spreads the virus to fewer than one other person). Only when the R falls below 1.0 will the pandemic slowly fade away.

In our focus on 20 large states, three broad categories emerge.

Category 1: States that have so far been successful in the war against the pandemic where the 'R' rate shows a declining trend.

Ten of the larger states in India have shown encouraging signs - with the 'R' showing a declining trend (see 'R' graphs below).

The 'R' has in fact dropped below 1.0 - the first target for all nations - in Gujarat, Jharkhand and J&K. But the battle is not over. As the graph for 'R' in Telangana shows, 'R' fell below 1.0 for a while (as in the third week of July) and then spiked again - Telangana needs a huge policy effort once again to bring the 'R' back down to under 1.0 to ensure that the spread of the virus slows down.

There are some worrying signs in Maharashtra and Madhya Pradesh that the encouraging downward trend of 'R' may have halted - urgent measures are needed to ensure that the earlier momentum is not lost. 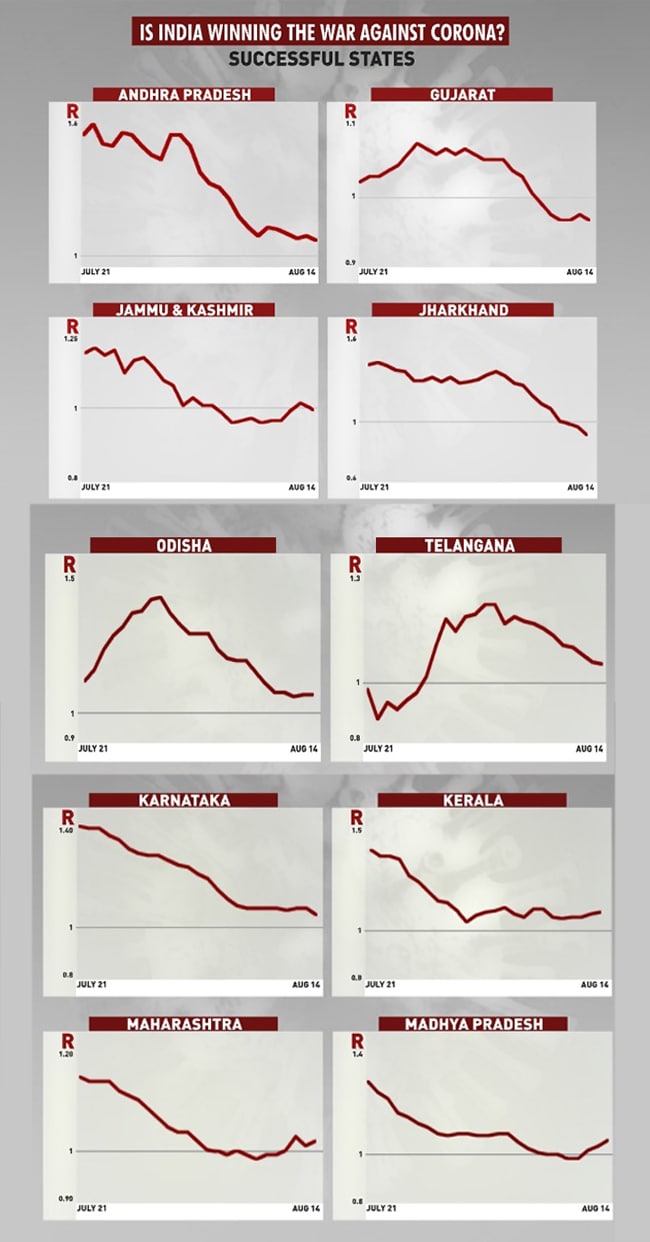 Category 2: States which have so far been successful in the war against the pandemic but where there may be signs of a possible new spike:

In six of the larger states of India, there are some indicators of a new spike or a surge in the spread of the coronavirus.

Perhaps the biggest worries are Assam and Chhattisgarh - both states had brought 'R' down to under 1.0, but in the last fortnight, the level of 'R' has risen to unacceptably high levels above 1.30.

Delhi has been the most successful state in 'flattening the curve' of new cases - but there is a significant new concern that the trend in 'R' is revealing. While the level of 'R' in Delhi is still low, there has been a rise in 'R' from 0.75 to 1.05 in the span of just two weeks. This change in 'R' is a message to the people and the government that this is not the time to get 'lockdown fatigue'.

Among the most successful states in combating the coronavirus has been Tamil Nadu (a state where the authorities need to be praised for using only RT-PCR tests and not the less reliable Rapid Antigen Test). But, like Delhi, there has been a worrying uptick in R recently - and while the level of R is still around 1.0, the rising trend in R is disturbing. 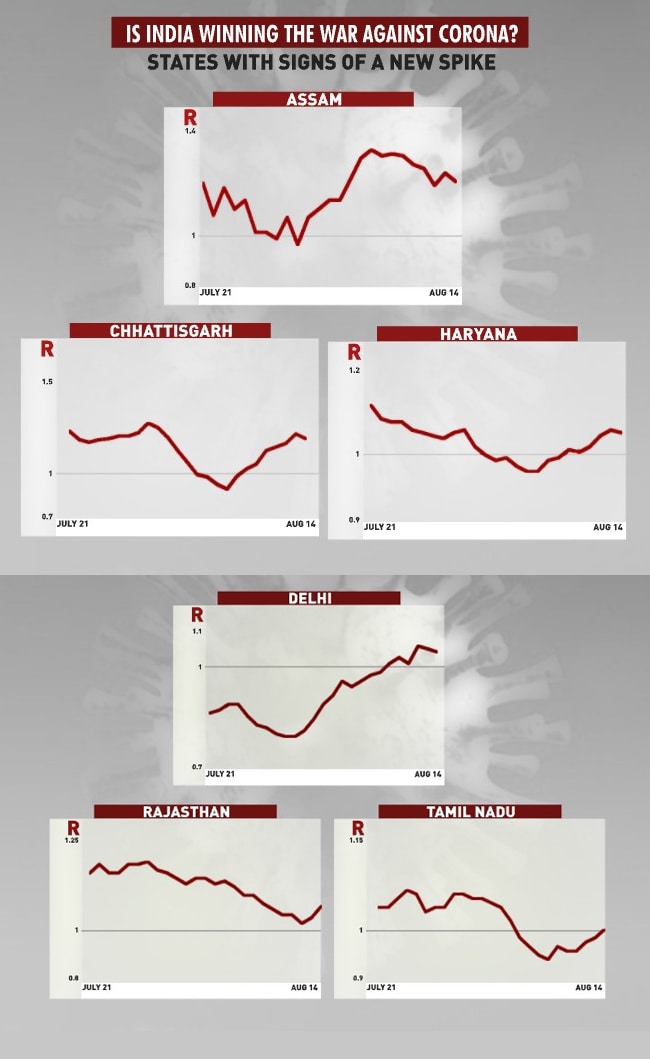 Category 3: States which have been the least successful in tackling the pandemic so far - where the 'R' factor is still high.

Perhaps the two most worrying states in India are Bihar - where the virus does not appear to be under control at all with the 'R' rate unacceptably high - and Punjab, which two months ago had somewhat controlled the virus , but the current 'R' rate indicates that the virus could spread again rapidly.

West Bengal is not as serious, it only just falls into a Category 3 state because there appears to be a second surge which has taken 'R' levels to where major policy action is called for.

India's largest state, Uttar Pradesh, has had a consistently high 'R' and the virus has been spreading rapidly. Fortunately there has been a recent downturn in 'R' but the level remains high. 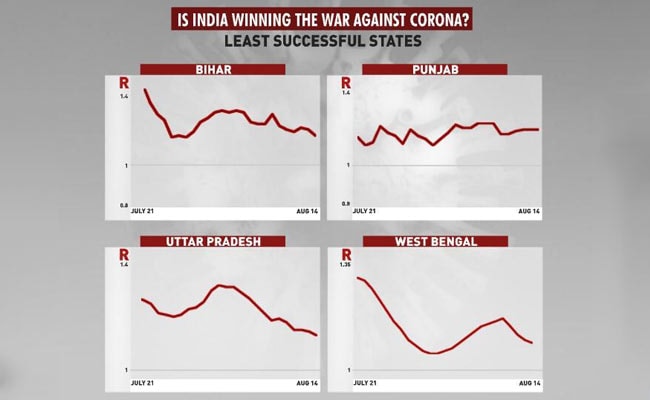 Finally - the all-India average 'R" indicates that contrary to the widely-held view that the virus is out of control in India, the situation is indeed improving. However, there is no room for complacency - the war is still on against the Coronavirus. Beware of new spikes! The Method: The 'R' factor is simple to understand but not always easy to compute. Professor Sitabhra Sinha of the Institute of Mathematical Sciences, Chennai, has done some outstanding work on modelling and measuring 'R' and has published his work in international journals. Professor Sinha helped us in working with a simple formula for the computation of 'R'. The results of our research on computing 'R' were used in the preceding graphs.

Observation: the measure of 'R' shown here is not as accurate as the 'R' values that Professor Sinha computes - despite the simpler methodology that he has helped us use, the general direction and trends in our graphs should provide a good indicator of the state of the war against the coronavirus in India.

(Note: If there are any errors, they are ours alone and cannot be attributed to Professor Sinha).