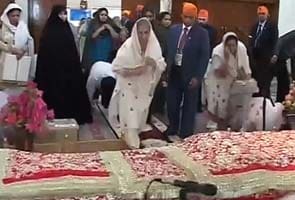 Tehran: It could simply be lore now, but if the story Jugal Kishore, the principal of Tehran's new Kendriya Vidyalaya told us is true, Iran's province of Zahedan was named for the Sikh gentlemen, called Zaheds- the pious- by the Shah at the time.

It was called Dozdab before being rechristened. Dozd for bandit, Ab for water. So in Persian it literally meant -a town of bandits by the water. When the Shah visited, he found Sikh gentlemen in white robes, and flowing beards and asked what they were doing among the thieves. And that's how Zahedan got its name.

Zahedan was also the place where Narender Kaur Sahni was born, 74 years ago. Her parents had arrived from the Punjab in their youth, beckoned by the promise of a better life in the transport business. For the Sikhs, Iran is sacred ground, in their "Taqdeer" as the priest in the local Gurudwara says, while addressing the sangat and its special guest, Mrs Gursharan Kaur.  They believe that Guru Nanak crossed through Afghanistan, Iran, and Iraq on his way to Mecca, and that's why Sikh populations, dwindling as they may be, go back centuries.

Things were good in her youth, Narender Kaur tells us. "Shah agar khaata tha, khilaata bhi tha" If the Shah ate himself, he made sure we got food on our table as well. When her parents arranged her marriage to Santok Singh Saini, 55 years ago, she could never have imagined considering any place other than Iran home. With runaway inflation, a devaluation of the Iranian Riyal and an Islamic code of conduct in place they've had to adapt to extremely trying circumstances.

Although their religious freedom wasn't curbed by the Islamic Republic, things changed after the revolution. Restrictions on women- their clothes and movement, the difficulty in owning property or getting business licenses meant that several of Tehran's nearly 3500 strong Sikh community began to leave. Today their numbers have fallen to about 50 or 60 families, and they still make up the bulk of the Indian diaspora in Iran.

Narender Kaur's is one of them.

Her husband has a small business, but her three children have long left the country for greener pastures. One is in England, the others in America. They are unlikely to come back. As much as it breaks her heart to leave the only home she has ever known, she and her husband are considering moving to one of them. For women like her the empty nest syndrome takes on an added heaviness in the current social and economic environment.

For younger families, who still have strong business ties here, many have made their peace with the changing situation. Their children go to the school Jugal Kishore runs. He tells us, the Sikh community approached the Indian government after the Islamic revolution in 1979 to help run the school, as the community that had started and paid for its upkeep and resources was beginning to leave. He came here 6 years ago from Punjab, on a posting from Kendriya Vidyalaya, and says he's had no trouble adapting to a country that's looked upon with apprehension at best by the rest of the world.

Promoted
Listen to the latest songs, only on JioSaavn.com
During this visit to Tehran, as the Prime minister met with representatives of the Indian community, his wife, Mrs Gursharan Kaur gave grants of 2 crore rupees for the upkeep of the school and 20 lakh rupees to the Gurudwara for its running. Beaming children and their parents, weathered old faces like those of Narender Kaur and her husband Santok who've seen it all, were out in all their glory to receive the first Indian leader to visit Iran. The small community, many of whom continue to be Indian citizens continues to looks towards Delhi to safeguard its interests in a country where their own stories are but a reflection of a greater crisis for everyone who calls Iran home.