During her career, Chhaya Sharma has led teams in detection and investigation of sensitive criminal cases and protection of human rights. 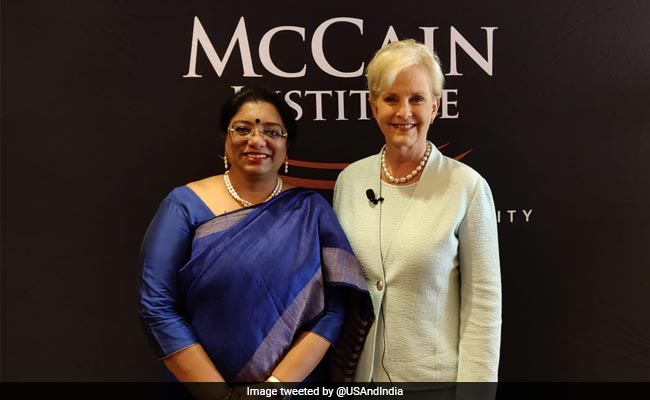 Chhaya Sharma closely supervised all aspects of the investigation of the Nirbhaya case.

IPS officer Chhaya Sharma, who led the investigation team of the infamous Nirbhaya gang-rape and murder case, was honoured with the 2019 McCain Institute Award for Courage and Leadership on Friday.

"A resolute guardian of human rights, Chhaya has led teams in detection and investigation of sensitive criminal cases and protection of human rights during her career spanning over 19 years. Sharma''s policing has consistently reflected victim-centric approach through her numerous investigations of serious crimes, particularly against women and children," said McCain Institute in a statement.

During her career, Chhaya Sharma has led teams in detection and investigation of sensitive criminal cases and protection of human rights. However, solving Nirbhaya's case is considered as the biggest milestone of her career.

"As the head of the special investigation team, she closely supervised all aspects of the investigation of the Nirbhaya case by actively taking charge of the situation - making quick decisions, giving directions, assimilating information and guiding with succinct inputs - all the while coordinating efforts of various teams. During the six gruelling days of the manhunt across five Indian States, Sharma stood as a shield for her team of officers and men, insulating them from mounting media and civil society pressures, which led to the quick apprehension of the perpetrators of that ghastly crime," it said.

"As the lead investigator, Sharma kept the focus on meticulous documentation and collection of scientific evidence. The charge-sheet in this case, filed in a record 18 day, withstood various stages of judicial scrutiny all the way up to the Supreme Court and resulted in a conviction with maximum punishment," it added.

She has also played a critical role in drafting Standard Operating Procedures and Guidelines to Combat Trafficking of Persons in India in 2017.

The award is given to those who show courage on behalf of human rights, humanitarian compassion, justice, freedom, and human dignity. Some of the famous awardees are-Malala Yousafzai (2015) and Dikembe Mutombo (2016).

PM Modi Not In "Good Mood" Over Border Row With China: Donald Trump