India's Next Mars Mission Will Have A French Connection 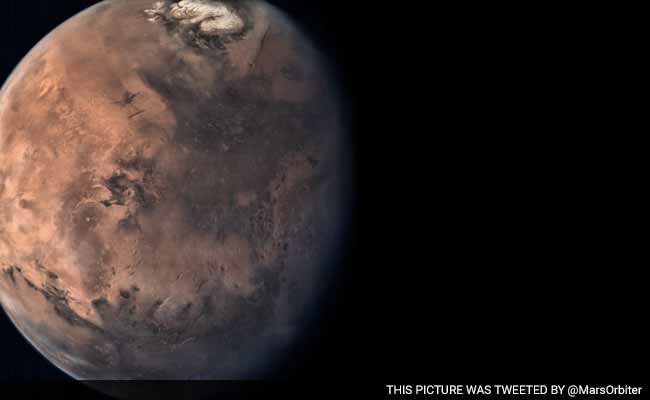 A rare and lovely photo of the full disc of Mars taken from 55,000 km, which shows the frigid north pole of the Red planet.

New Delhi: India's next mission to Mars will have a French connection and the two countries could together attempt to put a lander on the red planet.

"After India's Mars orbiter, the next step has to be a lander. A lander on Mars is not easy, but it will be interesting to undertake," Jean-Yves Le Gall, president of the French Space Agency CNES told NDTV.

India and France on Monday forged a new friendship in space technology at talks between Prime Minister Narendra Modi and French President Francois Hollande, who is on a two-day visit as the chief guest for Republic Day celebrations.

Among the 14 agreements that India and France signed after the two leaders held talks yesterday was a letter of intent on CNES participating in the Indian Space Research Organisation or ISRO's next Mars mission, expected around 2020.

Mr Le Gall said France would bring to the partnership its scientific expertise on the planets Mars and Venus.

"India's Mangalyaan is very impressive," he said, noting that "Mangalyaan is a good example of Make in India and of low-cost space exploration."

The 450-crore Mangalyan mission was launched on a homegrown PSLV rocket from Sriharikota in Andhra Pradesh on November 5, 2013.

In September 2014, ISRO successfully placed the low-cost Mars spacecraft in orbit around the planet in its very first attempt, breaking into an elite club of three - only the US, Russia and Europe had so far undertaken successful missions to Mars or its orbit.

The Mangalyaan has spent more than 15 months orbiting Mars and is currently located around 200 million km from Earth. The Mangalyaan is in fine health, says ISRO as it orbits around Mars in a highly elliptical orbit making scientific observations of the atmosphere of the planet.

If India and France jointly succeed in putting an object on the surface of Mars called a landing they would become the second nations to have done it. Till date only the US has succeeded in landing on Mars operational missions.