Indian Woman's 23-Hour Flight From US For Treatment In Chennai

The woman from Bengaluru suffered a cardiac arrest and moving her to India became critical after she developed renal failure which started affecting other organs as well. 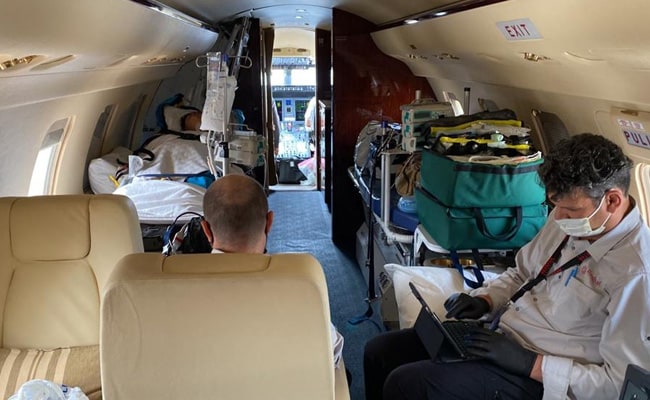 The woman was accompanied by her son who took off from Portland, US.

In one of the longest aeromedical transfers, an Indian woman in her sixties was shifted to Chennai 23 hours after take-off in an air ambulance from Portland Oregon in the US.

The woman from Bengaluru whose name has not been disclosed suffered a cardiac arrest while she was with her family in the US and was undergoing treatment at a tertiary hospital. Moving her to India became critical after she developed renal failure which started affecting other organs as well.

The Bengaluru-based ICATT Air Ambulance Service that brought the elderly woman to Chennai said "The woman was stabilised on Dialysis in the US. A team of doctors from the Chennai hospital got in touch with them to bring her back with the complex medical condition."

The team hired an air ambulance from Turkey for aeromedical transfer and their team of doctors reached the US with equipment and worked with the doctors at the tertiary hospital.

Dr Shalini Nalwad, ICATT Director said, it was an extremely risky and challenging operation as the woman who was dependent on dialysis would be out of it during the flight. "We had to do it with military precision. Our doctors are well trained for uninterrupted ICU management in transit", she added.

At the second stopover in Istanbul, a wing-to-wing transfer of the patient was done from one flight to another to save time as the flight had to go for mandatory regulatory checks.

The woman was accompanied by her son who took off at 3 am India time from Portland, Oregon on July 17 and landed in Chennai by 2 am on July 19, it cost the family Rs 1 crore.