On Friday, Prime Minister Narendra Modi turned visibly emotional as he spoke about those who had lost their lives to the virus. 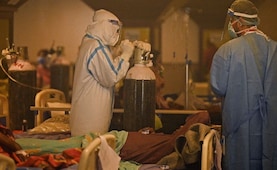 The IMA only keeps a record of its nearly 3.5 lakh members (Representational)

The Indian Medical Association (IMA) has said 420 doctors, including 100 in Delhi, have succumbed to the coronavirus infection in the crippling second wave of the pandemic that has overwhelmed the hospitals and has kept the crematoriums blazing.

The coronavirus cases in the national capital have been on decline recently after an overwhelming crisis in April.

At least 96 doctors have died in Bihar and 41 in Uttar Pradesh, the doctors' association said.

Earlier this week, the top medical body reported 270 doctors have died due to coronavirus. Among them was former IMA president Dr KK Aggarwal, who died due to the deadly virus on Monday. He was 65.

Dr Aggarwal, who had taken both vaccine doses, died at 11.30 pm on Monday "after a lengthy battle with Covid", said an official statement on his Twitter account.

According to the IMA's COVID-19 registry, 748 doctors died due to the disease in the first wave of the pandemic.

"The second wave of the pandemic is turning out to be extremely fatal for all and especially for the healthcare workers who are at the forefront," IMA president Dr JA Jayalal said earlier in the week.

The IMA only keeps a record of its nearly 3.5 lakh members. India, however, has more than 12 lakh doctors.

As many as 2,57,299 fresh COVID-19 infections and 4,194 deaths were reported in the country in the last 24 hours, the Union Health Ministry informed today.

On Friday, Prime Minister Narendra Modi turned visibly emotional as he spoke about those who had lost their lives to the virus.

He thanked doctors and frontline workers during video conference with health workers in Varanasi, his parliamentary constituency in Uttar Pradesh.

"In the second wave of corona, we are fighting on multiple fronts at the same time. The rate of infection is also much more and patients are in hospital for a longer time," said PM Modi.

After peaking in early May, Covid cases have been declining in the past two weeks but experts have warned against a third wave that may be tougher on children.