Three people from China - two men and a woman - were rescued by the Indian Army in north Sikkim on Friday after they lost their way. 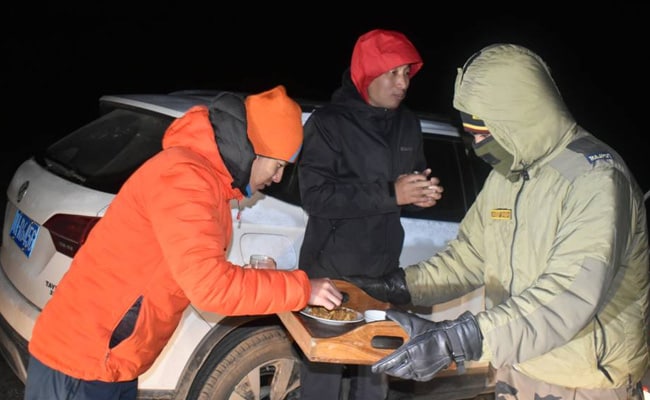 Indian Army Helps Chinese Troops: A soldier is seen offering food to one of the men.

Three people from China - two men and a woman - were rescued by the Indian Army in North Sikkim on Friday after they lost their way. In a heartening gesture, the soldiers, who "extended a helping hand", also offered them food and warm clothes to protect them from the harsh climate in the area. The three Chinese citizens had lost their way "in Plateau area of North Sikkim at an altitude of 17,500 feet," an official statement said.

"Realising danger to the lives of the Chinese citizens which included two men and one woman in sub-zero temperatures, the soldiers of Indian Army immediately reached out and provided medical assistance including oxygen, food and warm clothes to protect them from the vagaries of extreme altitude and harsh climatic conditions (sic), " the Army said in a statement.

Visuals show a soldier carrying oxygen cylinder helping the three people. Another picture shows a security personnel offering food to one of the men. The soldiers also helped the people fix their car.

"The Indian troops also gave them appropriate guidance to reach their destination after which they moved back. The Chinese citizens expressed their gratitude to India and the Indian Army for their prompt assistance," the Army said.

मानवता सर्वोपरि#IndianArmy extends help and #Medical assistance to stranded #Chinese citizens at the India - China Border of #NorthSikkim at altitude of 17,500 feet under extreme climatic conditions.

The incident comes days after the government said Chinese troops engaged in "provocative action" at the south bank of Pangong Lake in eastern Ladakh last Saturday and again on Monday.

The fresh flare-up came months after the clashes with Chinese troops in June in Galwan Valley killed 20 Indian soldiers in action. Yesterday, the Defence Ministers of the two countries - Rajnath Singh and Wei Fenghi - held talks in Russia's Moscow.

"The two sides should continue their discussions, including through diplomatic and military channels, to ensure complete disengagement and de-escalation and full restoration of peace and tranquillity along the LAC at the earliest," the defence ministry said in a series of tweets on Saturday.