"India Will Not Balk At Using Strength To Defend Itself": Rajnath Singh

Rajnath Singh is on a three-day official visit to South Korea in the second leg of a two-nation tour which also involved Japan. 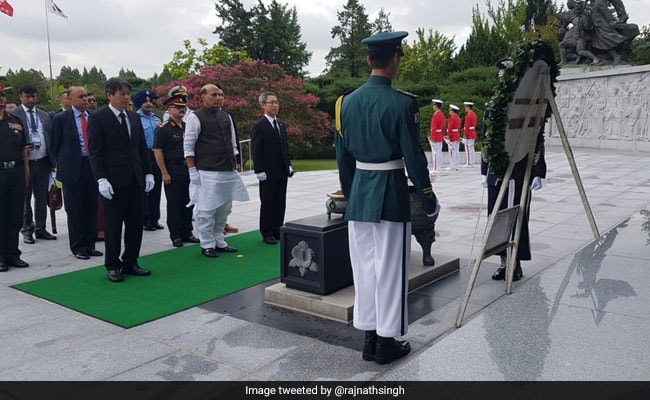 Union Defence Minister Rajnath Singh has said that India will not balk at using its strength to defend itself, while addressing a defence dialogue in the South Korean capital of Seoul this morning.

Rajnath Singh is on a three-day official visit to South Korea in the second leg of a two-nation tour which also involved Japan. He was addressing a special session of the Seoul Defence Dialogue on Thursday, excerpts of which he shared on his twitter handle.

The Defence Minister said, "Shared my views on the strong currents towards peace that are present in the Korean Peninsula."

"India has never been an aggressor in its history, nor will it ever be. But that does not mean that India would balk at using its strength to defend itself," he said.

In August, Rajnath Singh had sparked a debate over India's nuclear doctrine and the no first use policy. During a visit to Pokhran on the occasion of former Prime Minister late Atal Bihar Vajpayee's birth anniversary, Rajnath Singh had said that India has strictly adhered to the no first use nuclear doctrine but what happens in the future depends on the circumstances.

"Defence diplomacy is a key pillar of India's strategic toolkit. In fact, defence diplomacy and maintaining strong defence forces are two sides of the same coin. They go hand-in-hand," the Defence Minister said in Seoul.

Rajnath Singh's statement on Thursday comes amid the heightened military tension between India and Pakistan following the withdrawal of special status to Jammu and Kashmir on August 5. In the last week of August, Pakistan Prime Minister Imran Khan had warned about nuclear warfare in the Indo-Pak region during an address to his nation.

"If this issue worsens to a war-like situation, then one must remember that both the countries are nuclear states. And no one wins a nuclear war. Whether the world supports us or not, Pakistan will go to any length now," he had said.

However, Imran Khan made a complete U-turn on Pakistan's nuclear doctrine earlier this week when he said that his country is committed to the 'no first use' policy.

(Except for the headline, this story has not been edited by NDTV staff and is published from a syndicated feed.)
Comments
Rajnath SinghSouth Koreadefence dialogue