How US Scored Landmark Military Agreement With India: Foreign Media 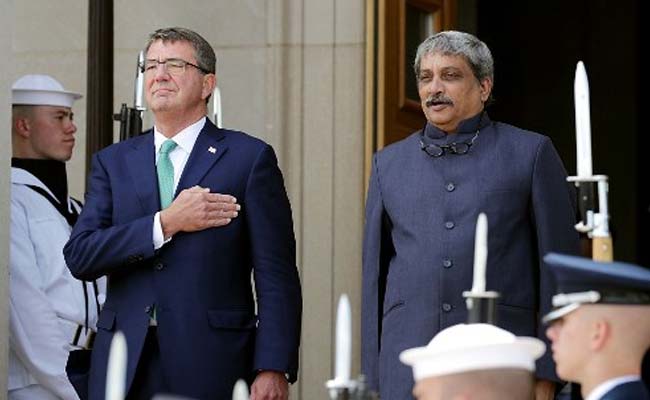 The India-US military cooperation deal was finalised during Manohar Parrikar's ongoing US visit.

After nearly a decade of painstaking discussions, India and the United States signed on a landmark defense agreement that will increase the military cooperation between two of the world's largest democracies.

The agreement was finalized during an ongoing visit by Indian Defense Minister Manohar Parrikar to Washington, D.C., and was touted as an indication of a deeper defense ties between the two nations in an increasingly tense part of the world.

In a joint statement, Parrikar and the U.S. Secretary of Defense Ashton Carter said discussions ranged from "increased strategic and regional cooperation, to deepened military-to-military exchanges, to expanded collaboration on defense technology and innovation."

In spite of the growing strategic proximity between the two nations, New Delhi has had deep reservations about this agreement for nearly a decade.

Many security officers and politicians in the previous government in India had warned that it could lock India into a formal and irreversible military alliance and push New Delhi into supporting American conflicts, a move that may upset countries like Russia, China and friendly nations in the Middle East.

"We resisted this agreement for long because we didn't want to give the perception that we are ganging up with Americans against somebody else, in particular China," said Pallam Raju, former junior minister for defense in the previous government.

After several decades of Cold War era suspicion and chill, relations between India and the United States have transformed in the past decade with deepening commercial and strategic partnership after they signed the landmark civilian nuclear cooperation deal in 2008.

The process has speeded up under Prime Minister Narendra Modi's government, which over the past two years has strived to transform the ties between India and the United States from just a buyer-seller defense relationship into a deeper strategic alliance in the Asia Pacific and Indian Ocean Region.

New Delhi has stressed the need for joint research and joint production of defense equipment.

United States is the second largest defense equipment supplier to India with around $4.4 billion worth deals in the past three years. It is also India's most common partner in military exercises. Six years ago, President Barack Obama called the ties with India "the defining partnership for America in the 21st century."

Washington, which has signed more than 100 such agreements with partner nations, promoted the deal as a way of building interoperability between the two militaries.

It has been a bumpy road to greater military cooperation. Every time, the United States reached out for a deeper strategic embrace, New Delhi would take an awkward step back.

Earlier this year, a senior military officer Adm. Harry Harris said at an event in New Delhi that soon the naval vessels of the two nations steaming together "will become a common and welcome sight throughout Indo-Asia-Pacific waters." The statement was aimed at countering Beijing's expanding military footprint in the region and echoes Washington's expectation that India plays the potential of net security provider in Asia.

Parrikar immediately ruled out any plans for joint patrols by the two navies.

During the negotiations, the United States sought to address Indian concerns about being drawn into U.S. conflicts and tweaked the agreement accordingly.

The agreement, reached early Tuesday morning New Delhi time, "does not create any obligations on either party to carry out any joint activity. It does not provide for the establishment of any bases or basing arrangements," said the Indian government statement.

The agreement streamlines relations between the two militaries, for instance allowing refueling without having to come up with a new agreement each time, said analysts.

"It's like having a tab at the local bar. It is an easier way of doing things. It will facilitate cooperation in high seas," said Ben Schwartz, the director for defense and aerospace, at the U.S.-India Business Council.