The maiden India-UK Joint Tri-Service exercise Konkan Shakti is scheduled to be held between October 21 and 27 off the west coast of India and aims to derive "mutual benefits" from each other's experiences. 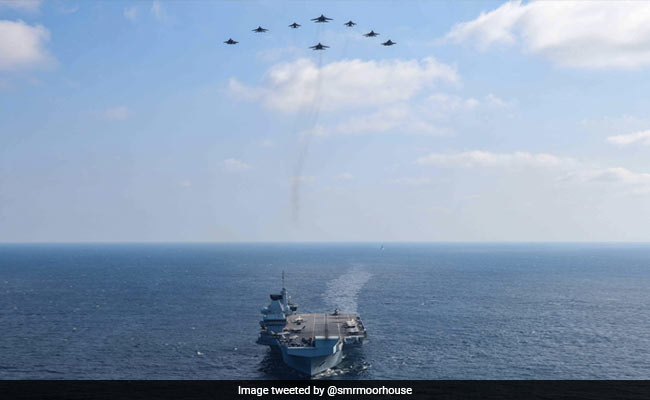 The exercise is scheduled to be held in two phases.

The sea phase of the maiden bilateral tri-service exercise 'Konkan Shakti 2021' between the UK and Indian Armed Forces commenced off the Konkan coast in the Arabian Sea.

According to an Indian Navy official, all participating units were split into two opposing forces with the aim of achieving 'sea control' to land Army ground-troops at a pre-designated site.

"All 3 Services from the Indian and UK Armed Forces exercising simultaneously in exercise Konkan Shakti-21 conducted by the 2 countries to date. CSG21 aircraft and ships participating side by side with our Indian counterparts developing interoperability," Commander UK Carrier Strike Group tweeted.

All 3 Services from the Indian & UK Armed Forces are exercising simultaneously in the most ambitious exercise #KonkanShakti21 conducted by the 2 countries to date. #CSG21 aircraft & ships are participating side by side with our Indian counterparts developing interoperability???????????????? pic.twitter.com/vhgGI13Uop

One force was led by the Flag Officer Commanding Western Fleet and comprised the flagship INS Chennai, other warships of the Indian Navy and HMS Richmond, the Royal Navy's Type 23 frigate. The other force operated under the UK Carrier Strike Group comprising aircraft carrier, HMS Queen Elizabeth, other UK and Netherland naval ships, and Indian warships.

The official further said that the two forces integrated within their groups with exercises such as replenishment at sea approaches, air direction and strike operations by fighter aircraft (MiG 29Ks and F35Bs), cross control of helicopters (Sea King, Chetak and Wildcat), transiting through war-at-sea scenarios, and gun shoots on expendable air targets.

"The simulated induction of Army troops was also undertaken and was followed by setting up of a joint command operations centre. The two forces thereafter affected a rendezvous at sea with advanced air and sub-surface exercises," said the official.

Talking about the air operations, the official said that it included strikes on the combined formation by Indian maritime patrol aircraft (MPA) Dornier, fighters of the Indian Navy (MiG 29Ks), Royal Navy (F35Bs) and Indian Air Force (SU-30 and Jaguars), as well as a composite flypast over the formation.

Sub-surface exercises with an Indian Scorpene-class submarine and underwater remote-controlled vehicle EMATT, operated by the Royal Navy, were undertaken through the night. Indian MPA, P8I, also participated in the exercise.