External Affairs Minister S Jaishankar, who is on a two-day visit to Iran, co-chaired the 19th Joint Commission Meeting with his Iranian counterpart Javad Zarif. 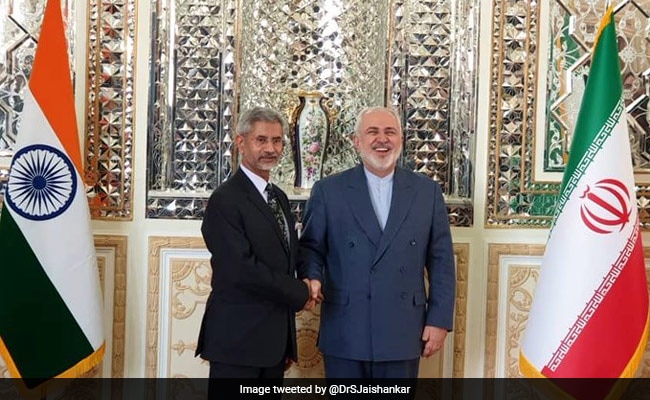 The Chabahar port -- jointly being developed by India, Iran and Afghanistan -- is considered a gateway to golden opportunities for trade with central Asian nations by the three countries. It is located on the Indian Ocean in the Sistan and Baluchestan province of Iran.

S Jaishankar, who is on a two-day visit to Iran, co-chaired the 19th Joint Commission Meeting with Zarif. He is also expected to call upon Iranian President Hassan Rouhani.

"Reviewed the entire gamut of our cooperation. Agreed on accelerating our Chabahar project," he said.

The meeting comes after the US provided a rare exemption to India from sanctions on the Chabahar port in Iran as Washington said it recognised that the strategic project was a lifeline for war-torn Afghanistan to get humanitarian supplies from India.

S Jaishankar thanked Zarif for "his cordial welcome and hospitality."

"Had a very good conversation on the regional and global picture with the Iranian foreign minister. India and Iran will work together closely on their shared interests," he tweeted.

"Our ties are ancient, historic & unbreakable," he added.

Prime Minister Narendra Modi had met President Rouhani earlier this month on the sidelines of the high-level 74th Session of the General Assembly.

PM Modi reaffirmed India's support for giving priority to diplomacy, dialogue and confidence building for maintaining peace and security in the Persian Gulf amidst tensions in the region, as he held wide-ranging talks with Iranian President on regional and global developments of mutual interest.

In May 2016, India, Iran and Afghanistan inked a pact which entailed establishment of Transit and Transport Corridor among the three countries using Chabahar port as one of the regional hubs for sea transportation in Iran, besides multi-modal transport of goods and passengers across the three nations.

The port in the Sistan-Balochistan province on the energy-rich nation's southern coast is easily accessible from India's western coast and is increasingly seen as a counter to Pakistan's Gwadar Port, which is being developed with Chinese investment and is located at distance of around 80-km from Chabahar.

India has been closely working with Afghanistan and Iran to create alternative, reliable access routes for trade in the wake of Pakistan denying transit access to New Delhi.