Migrants Out On Tracks As Trains Run Late By 10 Hours With No Food, Water

India lockdown: Over 12.33 lakh people have returned to Uttar Pradesh by 930 ''Shramik Special'' trains, during the lockdown, according to officials.

Migrant workers travelling on 'Shramik special' trains to eastern Uttar Pradesh and Bihar have complained of inordinate delays and unhygienic conditions on board, even resorting to protests along the route by blocking railway tracks and demanding accountability. They have also claimed that rotten food was served to them during the journey.

Workers on board one such train bound for Bihar from Visakhapatnam in Andhra Pradesh blocked railway tracks and raised slogans against Chief Minister Nitish Kumar after their train was held up at the outer signal of the Deen Dayal Upadhyaya railway junction ( formerly known as the Mughal Sarai junction), bordering Bihar for over 10 hours.

"The train came here last night at 11 pm and is standing here since. We have got no food for two days. We were forced to pay Rs 1,500 each for this journey," complained Dhiren Rai, one of the migrant workers on board the train.

Another train from Panvel in Maharashtra to Uttar Pradesh's Jaunpur was held up near Varanasi for over 10 hours. Late night visuals showed angry migrant workers squatting on railway tracks and refusing to move despite another train approaching them. They left only after the railway police intervened and everyone on board was given a meal. The train later resumed its journey . 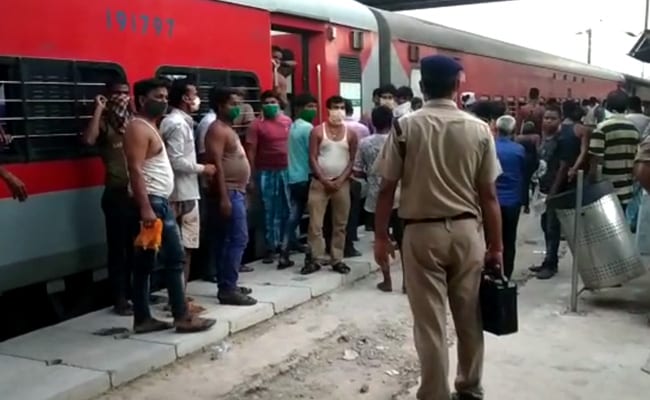 Migrant workers on board a "shramik special" train threw away the food served to them at Uttar Pradesh's Kanpur junction claiming it was rotten.

"We got food in Maharashtra but we got nothing in Uttar Pradesh. The train was held up in Kashi (Varanasi) for 7 hours, then it moved and was held up again for 2 hours. Later it moved and is stuck again," said  Govind Kumar Rajbhar, one of the passengers on board the train.

On Friday evening, migrant workers on board a "shramik special" train going from Gujarat to Bihar threw away the food served to them at Uttar Pradesh's Kanpur junction claiming it was rotten. Visuals from Kanpur show angry migrant workers confronting railway security personnel asking them why the migrants were being subjected to inhuman treatment .

"There is no water even in the toilets. What should we drink. The pooris served to us are very tight as if they were cooked four or five days ago, that is why we threw away all the food," one of the migrant workers told journalists at Kanpur.

Another incident was reported in Unnao, where passengers heading from Bengaluru to Bihar smashed window panes at a platform complaining about lack of food and water arrangements after the train made an unscheduled stop at the station.

"Over 18.24 lakh labourers have returned to Uttar Pradesh from other states during the lockdown. Over 12.33 lakh people have returned by 930 ''Shramik Special'' trains. The government has approved 1,199 trains to bring back migrant workers," said Awanish Awasthi, Additional Chief Secretary, Home, Uttar Pradesh.

The Railways has ferried over 31 lakh migrant workers on board 2,317 Shramik Special trains since May 1, almost seven lakh more than the initial projection of 24 lakh, according to official data.