New Delhi has set up three hydroelectric projects in Bhutan with a total capacity of 1,416 MW, which are operational. 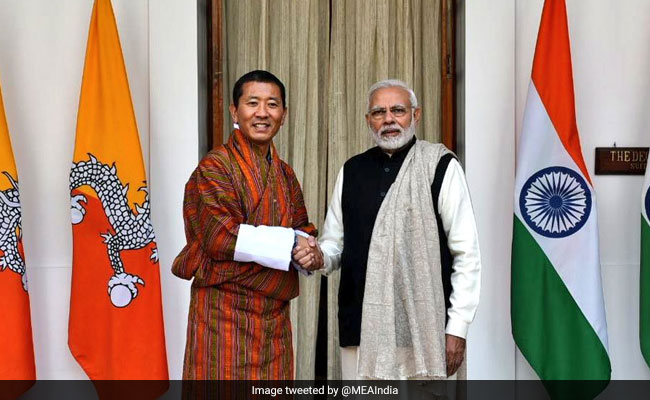 India and Bhutan on Friday reviewed the progress of hydroelectric projects in the Himalayan nation during a meeting between Prime Minister Narendra Modi and his Bhutanese counterpart Lotay Tshering in New Delhi.

"Development of hydrolectric projects is an important part of the long history of India's aid to Bhutan," PM Modi said in a joint address to the media with PM Tshering after the meeting.

"Today we reviewed our aid for all related projects in this important sector," he said.

There are a number of institutional mechanisms between India and Bhutan in areas like security, border management, trade, economy, hydroelectricity, development cooperation and water resources.

New Delhi has set up three hydroelectric projects in Bhutan with a total capacity of 1,416 MW, which are operational. About three-fourth of the power generated is exported to India and the rest is used for domestic consumption.

Stating that space science is a new area of cooperation between the two countries, PM Modi said that a ground station will be soon be developed in Bhutan by the Indian Space Research Organisation (ISRO) to the reap the benefits of the South Asian Satellite.

He also expressed happiness at PM Tshering conveying him the news that Bhutan will soon launch the RuPay cards.

On his part, PM Tshering said that the main aim of his visit, taking place on the golden-jubilee year of India-Bhutan diplomatic ties, is to take the bilateral relationship to much greater heights.

He also said that there are "many, many miles to go" India's aid for development of hydroelectric projects in Bhutan.

He invited PM Modi to visit Bhutan at the earliest.

Earlier, PM Tshering was accorded a ceremonial welcome at the Rashtrapati Bhavan.

PM Tshering arrived in New Delhi on Friday on a three-day visit to India, his first official trip abroad after assuming office in October.

Tshering's Druk Nyamrup Tshogpa (DNT) party, formed in 2013, won 30 of the 47 National Assembly seats in the elections in Bhutan held in October.

The country of 800,000 people, located between India and China, has chosen a different party to rule at each election since the end of absolute monarchy in 2008.