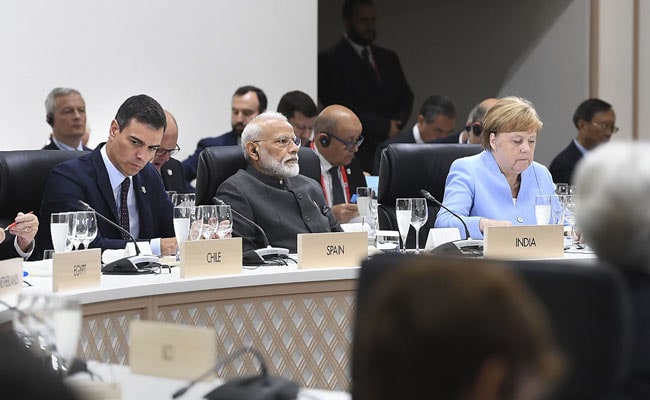 PM Modi along with other leaders of the G20 nations in Osaka, Japan.

India pitched the need for joint action against economic offenders at the 'Group of 20' summit in Osaka, Japan on Saturday, calling on the G20 countries to deny safe haven to business magnates on the run from law. Prime Minister Narendra Modi has raised these issues at all global forums, said Suresh Prabhu, India's Sherpa to G20.

"All G20 countries must fight against corruption by combating foreign bribery and ensuring that each country has a law to enforce it," Mr Prabhu said at a press conference in Osaka.

"We strongly feel that we as a global community must act in unison to deal with such issues of people committing economic offences and running away from their national domicile country," he said.

The call came amid efforts by Indian authorities for the extradition of the fugitive jeweller Nirav Modi from the UK after he left the country in January 2018. Nirav Modi and his uncle Mehul Choksi are the prime accused in a Rs 13,000 crore scam that involved fake guarantees in the name of the state-run Punjab National Bank.

Mehul Choksi, who had taken Antigua citizenship, suffered a major setback recently when the Caribbean nation's government announced that his citizenship will be revoked once he has exhausted all his legal options.

Authorities have also sought the extradition of businessman Vijay Mallya who is wanted in India for defaulting on Rs 9,000 crore in loans to his failed Kingfisher Airlines. Vijay Mallya left India in March 2016 after banks got together to initiate legal proceedings to recover the money he owed them. India formally asked for his extradition in February last year. He is currently living near London.