In A First, IAF Choppers Shower Flowers After Flag Unfurling At Red Fort

Independence Day: The petals were showered in the Amrut formation drawing loud applause and cheers from the audience. 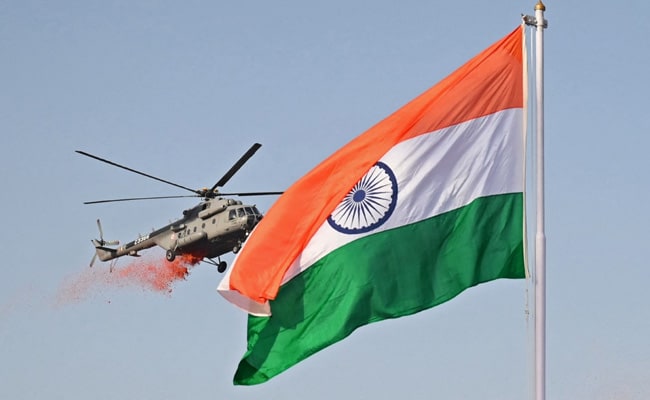 The petals were showered in the Amrut formation drawing loud applause and cheers from the audience.

After the showering of flower petals, Prime Minister addressed the nation.

Thirty-two Olympians who made the country proud at the Tokyo Games and two officials of the Sports Authority of India (SAI) were invited to participate in the Independence Day celebrations.

Javelin thrower Neeraj Chopra, who created history at the recently-concluded Olympics by winning the country's first track-and-field gold medal, was among the 32 athletes.

Talking about the IAF choppers showering flower petals, Ritika Joshi, who was present in the audience, said, "It was a sight to witness when flower petals dropped on each of us. We saluted the commanders."

For Shubhanshu Sharma, tricolour balloons released in the air was among the highlights of the celebrations.

"This year having flower petals showered by IAF helicopters was a pleasant surprise which filled our hearts with respect for our forces," he said.

A separate block was created on the south side of the Red Fort's ramparts for "Corona warriors" such as healthcare workers to honour them for the pivotal role they played in fighting the pandemic.

India is commemorating its 75th Independence Day as ''Azadi ka Amrit Mahotsav'' under which a series of events have been organised across the country.