Mamata Banerjee called for cherishing the "idea of India" for which the freedom fighters had laid down their lives. 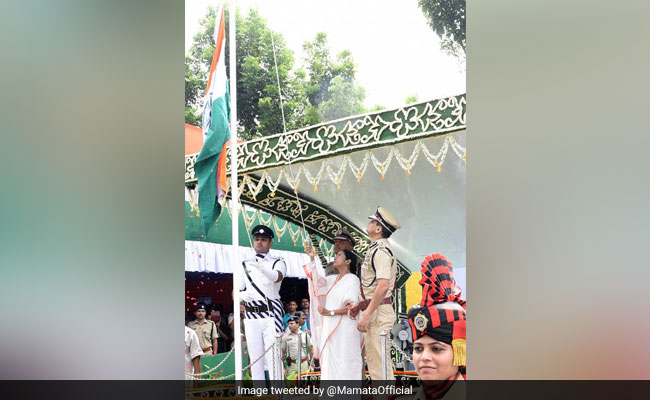 Mamata Banerjee unfurled the tricolour and attended a colourful parade.

West Bengal Chief Minister Mamata Banerjee today said the people of the country and its institutions must strive to remain "independent" in the true sense of the word.

In a midnight tweet on the occasion, Ms Banerjee called for cherishing the "idea of India" for which the freedom fighters had laid down their lives.

"Our country must reach the glorious heights that the founding fathers of our Constitution envisioned," she tweeted greeting "all brothers and sisters".

Her ministers, senior bureaucrats and police officers, armed forces officers and members of the diplomatic corps also took part in the main function in the city.

She also conferred the Chief Minister''s medal to police officers.

Various wings of the police and NCC cadets participated in the parade, as a helicopter showered petals, and folk dance troupes from across the state depicted diverse cultures.

In a first, police personnel from Odisha took part in the parade.

Riding their blue-white and pink-black scooters, the newly formed special all-women patrolling team from the Kolkata Police earned applause on their maiden presence in the parade.

Constituted in 2018, the team christened "winners" have been primarily trained to assist their male counterparts in helping women complaining of molestation or eve-teasing.

After the Trinamool came to power in 2011, Ms Banerjee started the ritual of the Independence Day parade at the Indira Gandhi Sarani.

Governor KN Tripathi joined a traditional prayer meeting at the Gandhighat in Barrackkpore in 24 Parganas North district. He offered flowers at the base of the Gandhi Memorial column on the bank of the Hooghly river.

Amid rendition of Ramdhun and spinning of the charkha, patriotic compositions were sung by a choir on the occasion.

Mr Tripathi also paid floral tributes exactly at noon at the base of Mahatma Gandhi''s statue on Mayo Road in the heart of Kolkata.

The state government organised a sit and draw competition for school children at the Kolkata Information Centre, where a photography exhibition "Bengal is our pride" will be inaugurated in the evening.

The tricolour was hoisted and unfurled in all the districts of the state by the authorities.

Independence Day was also celebrated in schools and colleges, hospitals and other government and non-government institutions across the state.

Patriotic songs reverberated in the air while people exchanged greetings and wishes on the occasion.