Mohandas Pai has said "tax terrorism is the biggest threat to the ease of doing business in India". 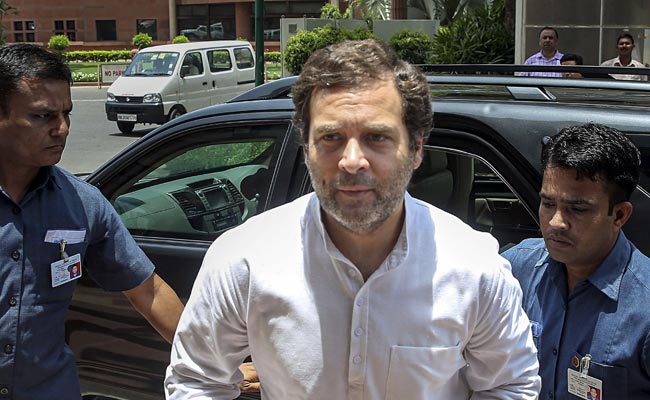 Congress leader Rahul Gandhi on Monday took a dig at the Modi government over the issue of entrepreneurs facing tax terrorism, saying that the attempt was being made to meet India's revenue shortfall.

"The FM (Nirmala Sitharaman) said in her budget speech that an elephant should take just 2 pounds of rice and not trample the entire paddy field," Mr Gandhi said in a tweet.

"Meanwhile, the IT dept elephant is running amok in a bid to meet India's revenue shortfall," he wrote while sharing media reports alleging that "tax terrorism" was hurting India's growth.

Mohandas Pai, in an interview to NDTV, said "tax terrorism is the biggest threat to the ease of doing business in India" and despite the government's promise to end it, "unnecessary tax litigation is still rampant" which is not allowing the country to achieve its potential.

"He (a government official) called up Kiran and Kiran sent me an SMS... and she also told him to go away and I also told him that this is not correct. So this issue is I think the culture among a set of officials, who think that they are born to rule us," he said.

He also recounted an incident, where an official called up his colleague in Infosys and threatened to "shut him down".

"So this is the attitude and this should be condemned and on tax terrorism, the NDA is not able to reverse. (Former Finance Minister Arun) Jaitley promised it and in 2014, it was in the manifesto. But in the last five years there has been a doubling of the total claims to 6 lakh crore so I think we are not seeing a reducing tax terrorism... you have seen in the last budget how the officials did not do their homework and blamed the finance minister," he added.

Last week, Kiran Mazumdar Shaw retweeted a tweet by one Rajiv Mantri which said: "Highest interest rates in the world, usurious income tax rates, triple tax on dividend, tax on buy back, tax on securities transactions, progressive taxation with GST. And then we are surprised, what killed sentiment, what destroyed animal spirits."