In UP's Sambhal, Questions On Legality Of Notices Sent To Alleged Rioters

The state government says they are acting within the ambit of the law but questions have emerged about the protocols followed and evidence cited to identify the culprits.

In Sambhal, 59 people have been sent show cause notices for alleged rioting.

In the aftermath of the violence that erupted across Uttar Pradesh during protests against the amended Citizenship Act, the state government has sent out several show cause notices to alleged rioters to recover cost of damage from them, a move that has sparked controversy.

Chief Minister Yogi Adityanath had last month said that the government will take 'badla' or revenge from the rioters to recover cost. "There was violence in Lucknow and Sambhal and we will deal with it strictly. All properties of those involved in damaging public assets will be seized and auctioned to compensate for the losses. They have been captured in video and CCTV footage. We will take 'badla' (revenge) on them," Mr Adityanath said.

The state government says they are acting within the ambit of the law but questions have emerged about the protocols followed and evidence cited to identify the culprits.

In Sambhal, one of the districts hit by violence in western UP, 59 people were sent notices to recover losses pegged at about Rs 15 lakh, just six days after the clashes. Five of them - including a retired police officer, a farmer, and a businessman - have received identical notices for recovery of Rs 9.2 lakh.

Moazzam Khan, who took voluntary retirement in 2011 as a constable citing health reasons, says he was stunned when he received the notice. "I was shocked. A first information report has also been filed against me. I have been named for heinous crimes," he told NDTV.

Syed Aslam, the farmer, says his wife runs a school where scheduled caste and Muslim children study, and he had no role in the riots. "Fee at our school is Rs 100 a month. There are a few students who don't pay that also. There are concessions. They pay what they can," said Nahid Begum, Aslam's wife.

The thread that ties all five men is their membership of a local organisation - Sangarsh Samiti. The group members had planned a protest on December 19, which according to them, was called off when the administration denied them permission. 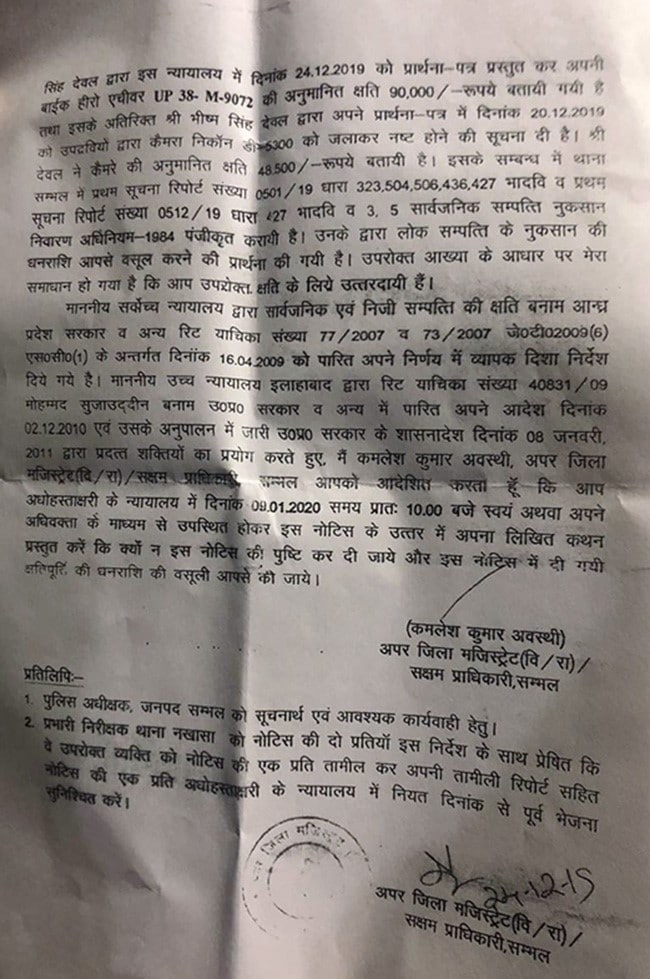 District Magistrate Avinash Krishan Singh said that the notices were sent to those who were identified in the videos. "There were CCTV cameras where this happened and people had also made video clips. We got these videos, and we identified these people from that. Those who had sticks, stones and those who were burning stuff... we sent them notices," he said.

But the Sangarsh Samiti members insist that they were at the cold storage unit of the head of the organization. Mushir Khan, the group's head, showed us CCTV footage clips which purportedly showed them at the storage unit at the time when violence broke out.

Others like Aflatoon, a part-time rickshaw puller, have been served notices seemingly on the basis of a mix-up of identity. His name is Aflatoon in all official records but he has been called "Sukha" in the notice. Also, the picture released by police after accusing him of rioting is not his. "When none of my details match, how do I accept I was at fault," he said.

NDTV reviewed multiple notices sent out in Sambhal. None of them mention any specific evidence against the protesters, simply stating that they have been identified based on a police report.

The notices say the government is following a 2009 Supreme Court order, a 2010 Allahabad High Court order and a state government order from 2011 for recovering dues from alleged rioters.

But the Supreme Court guidelines direct that the High Courts may set up a panel to probe the damage and it is unclear whether the Uttar Pradesh government has done so. The Supreme Court's guidelines also speak of how one needs to prove a link between the rioters and the event before liability can be applied. The basis of the evidence is unclear in the show cause notices.

"The claims commissioner will make a report to the High Court or Supreme Court which will determine the liability after hearing the parties," reads the Supreme Court order.