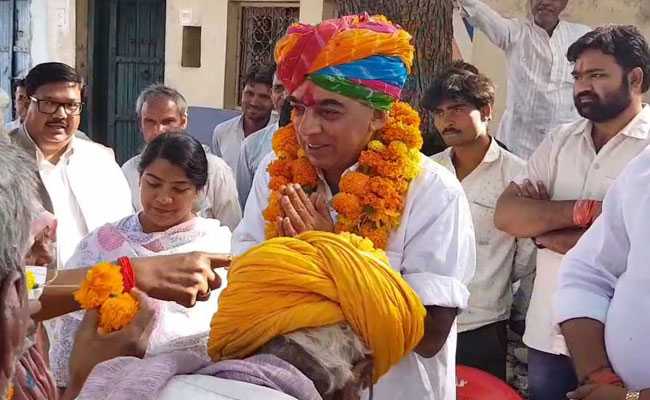 Manvendra Singh was nominated within a month of joining the Congress to fight Ms Raje.

A former Lok Sabha member and now an MLA from Sheo constituency in Barmer, he was nominated within a month of joining the Congress to fight Ms Raje, a decision that surprised many -- including the candidate himself.

"I wanted to contest the (2019) Lok Sabha polls but have been fielded by the party to contest the assembly polls. It is indeed a tough battle for the fact that I am new to Jhalrapatan while Ms Raje has been winning the seat since 2003," Mr Singh, a colonel in the Territorial Army who saw action during the 1999 Kargil war, said.

A small town in Jhalawar district, Jhalrapatan is among the most keenly-watched seats where the contest is as much personal as political.

Besides Muslims and Dalits, who form the bulk of voters in Jhalrapatan, the Congress by fielding Mr Singh, is eyeing the sizable Rajput electorate which has traditionally voted for the BJP but has been increasingly growing disenchanted with the ruling party.

The Rajput discontent against Ms Raje stems from the denial in 2014 of a ticket to BJP stalwart Jaswant Singh -- a former foreign, finance and defence minister, party vice president and a close confidante of late Prime Minister Atal Bihari Vajpayee -- to contest the Lok Sabha polls from Barmer, his home district. The BJP had then fielded Congress turncoat and Jat leader Sonaram Chaudhary, who won the seat.

Jaswant Singh, 80, who lost contesting as an independent in the 2014, has virtually faded into political oblivion after a stroke after a fall.

The Singh family holds Ms Raje responsible for denying Jaswant Singh a ticket in 2014 and by defeating the Chief Minister, it is hoping to "avenge the insult and humiliation" of the Rajputs by the BJP.

Even though he insists the "battle of Jhalrapatan" is a political fight between the Congress and the BJP, Singh, he, nonetheless, says it is "Rajput pride" -- which made him quit the BJP and embrace the Congress -- that is at stake.

"We have been consistently targeted by Ms Raje and the BJP. My joining the Congress was not a personal decision but of the people of not only of Jhalrapatan but entire Rajasthan who are angry over the nature and culture of governance, years of misrule and humiliation," he said.

Mr Singh had in September announced quitting the BJP during a "swabhiman" (self-respect) rally in Barmer, where he had said "Kamal Ka Phool, Hamaari Bhool" (choosing the BJP symbol lotus was our mistake).

While conceding it was an "unequal contest", Mr Singh said it was also a battle against "favouritism and vindictiveness" and his weapons were the people's anger against BJP, and his father's legacy.

"No doubt it is an unequal battle, but sentiments of the people are equally important. It is a battle against years of vindictiveness, of humiliation. It is the anger against years of neglect and corruption -- also, my father's legacy -- which will bring Raje's downfall," said Mr Singh, asserting that Congress coming to power in the state was a forgone conclusion.

Over 600 km from his family turf Barmer, Manvendra Singh, accompanied by his wife Chitra, has been actively campaigning in his constituency against Raje's "incompetent and corrupt" government. Going from door to door, he has been trying to convince the voters about his "honest politics" as against the all-pervasive corruption of the Raje government.

The Congress campaign also revolves around stoking the anger of Rajputs who are deeply anguished at the Raje government over the killing of gangster Anandpal Singh in a police gunfight in 2017.

Alleging it to be staged, Rajput bodies like the Rajput Karni Sena and Shri Rajput Sabha had staged multiple demonstrations demanding a CBI probe.

Jhalrapatan, along with 199 other constituencies, goes to polls on December 7 to elect a new assembly.

The results of the Rajasthan Assembly, along with that of Chhattisgarh, Mizoram, Madhya Pradesh and Telangana, will be declared on December 11.

The current round of Assembly polls is being perceived a "semi-final" before the country plunges into the 2019 Lok Sabha battle.