Nepali mountaineers have for decades helped others achieve feats. Rarely have they received the spotlight. This "K2 climb in winter" makes history. 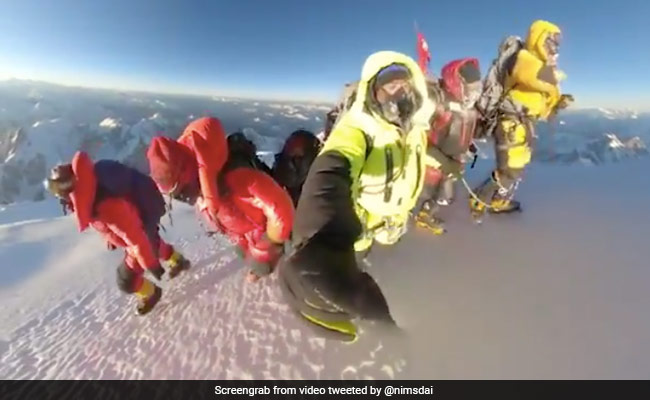 Nirmal Purja made a promise earlier this month: It will be the Nepalese climbing community that completes what is deemed one of the most daring mountaineering feats - reaching the summit of Mount K2 in winter. On January 16, he was part of one of the two Nepali teams that converged a mere 10 metres ahead of the 28,251-foot mountain's peak. From there on, there was no individual - only the Nepali, the Nepali national anthem, and the Nepali national flag - as the team achieved the unthinkable.

"No individual agendas, no individual greed but only solidarity and joint force of Team Nepal Flag of Nepal with a shared vision," Mr Purja, a former elite British Army soldier of Nepalese origin, posted on Twitter and Instagram, sharing a video of the last leg of their climb.

Brother to brother, shoulder to shoulder, we walked together to the summit whilst singing the Nepali national anthem. We all stopped around 10m before reaching the summit to huddle and make our final steps together as a team to mark this historical feat .. 1/4 #K2winterpic.twitter.com/P2kCwRy1Vn

The legendary Nepali climbers have for decades assisted those from other parts of the world achieve several mountaineering feats in the Himalayas. Seldom were they themselves celebrated.

The combined team, of which Mr Purja, who goes by the moniker Nimsdai on social media, was a part on January 16, made history in that sense.

Earlier this month, he had said on social media that all the 13 peaks above 8,000 metres had been scaled in winter by the international climbing community and "it would be a great feat for the Nepalese climbing community to make history".

"I will not leave the base camp until the mission is accomplished," said Mr Purja.

Referring to the achievement, senior Nepalese journalist and writer Kanak Mani Dixit said he was confident that nothing like this had happened in the annals of Himalayan mountaineering.

I am confident nothing like this has happened in the annals of Himalayan mountaineering: a group of climbers stops short of the summit of a 8000m+ peak & hand-in-hand moves to the top singing the national anthem. (Also enchanted to see pristine summit pyramid of K-2 in winter.) https://t.co/0ujcwkf4hE

The climbing achievement aside, the spirit of unity and brotherhood on display at such a historic moment is what thrilled Mr Dixit, too.