In Pak, teenage Hindu girl 'converted' to Islam, married off to Muslim 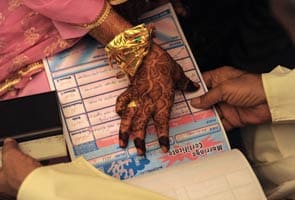 Karachi: A teenage Hindu girl in the southern Pakistani city of Karachi was allegedly forcibly converted to Islam and married off to a Muslim man, prompting her family to lodge a police complaint.

The case of the girl identified as Bharti, who has been renamed Ayesha following her conversion, is the 18th instance of forced conversions and marriages in the Lyari area of Karachi, The Express Tribune reported today.

The family of the girl alleged that she was forcibly converted to Islam and married off to a Muslim man. They filed an FIR at Baghdadi police station and a local court is now hearing her case.

During an appearance in court yesterday, she was clad in a black 'abaya' and barely looked at her parents when she saw them, the daily reported.

"She is being pressurized to say that she converted because of her own free will else we would be harmed," said her father, Narain Das.

Bharti's mother, a cardiac patient, was upset that she did not even glance at her.

"She is my only daughter. She does not want to meet me or talk to me. I gave birth to her and raised her," she said.

Das brought a copy of the National Database and Registration Authority's record, which states that his daughter is 15 years old.

However, certificates of her conversion to Islam and her marriage claim she is 18.

"The marriage documents have tampered with her age. She is not of the age to get married," said Das.

Bharti's husband Abid has been accused by her family of kidnapping her.

The girl's relatives alleged that Abid is a "wanted man" who "uses drugs and has eyes for every girl."

Das is not opposed to his daughter converting to Islam. His son converted too and lives in the same house.

Amarnath Motumal, Vice Chairperson of the Human Rights Commission of Pakistan, is representing the Das family in court.

He said he had seen many girls being forcefully converted and never returning home again.

"Her (Bharti's) statement will be recorded on Monday. Let's see what the court decides. Maybe it will be the last time her family will see her," he said.

Before she headed to court, Bharti said her marriage and conversion was a spontaneous decision.

"I liked Abid a lot. I went to the market to meet him and we decided then and there to run away," she said.

Her father-in-law Mohammad Anwar, a constable at Preedy police station, said with a smile: "...she always wanted to be a Muslim and has knowledge about Islam."

The Das family said it feared that if the court releases the girl to Abid's family, she will be "sold or murdered."

Promoted
Listen to the latest songs, only on JioSaavn.com
The relatives said they wanted a guarantee that they will be allowed to meet Bharti and that she will be in safe hands.

A frustrated relative said, "We are all heartbroken. If we don't get justice, we will all migrate from here."