On Camera, BJP Candidate Kicked Into Bushes As Bengal Votes For 3 Bypolls

The three seats being voted on today are held by different parties - Karimganj belongs to the Trinamool, Kharagpur to the BJP and Kaliaganj to the Congress

Jay Prakash Majumdar, the BJP candidate in Karimpur, was kicked into bushes by the side of the road

A BJP leader was heckled, assaulted and kicked into bushes by the side of the road in the Nadia district of Bengal today, in shocking scenes amid bypolls to three Assembly seats. In videos of the incident Jay Prakash Majumdar, the party's candidate for the Karimpur seat, can be seen emerging from a clump of bushes in which he had sought refuge from his attackers, who the BJP has claimed were Trinamool Congress workers. On being rescued a furious Mr Majumdar ran after his attackers while shouting in Bengali.

Mr Majumdar said the attack was a "clear sign of the end of democracy in Bengal". "It will not demoralise me and I will continue to visit all the booths. I have complained to the Election Commission," Mr Majumdar, Bengal BJP Vice President, said.

Bengal BJP leader Mukul Roy has written to the Election Commission demanding it intervene in the matter. "Today 50 TMC goons surrounded, kicked and pushed BJP''s Joy Prakash Majumdar. We demand the immediate removal of the Superintendent of Police and Additional SP," his letter read.

The local unit of the Trinamool has hit back, claiming Mr Majumdar had been attacked because he was "vitiating" the poll atmosphere.

The Election Commission has sought a report on the matter. 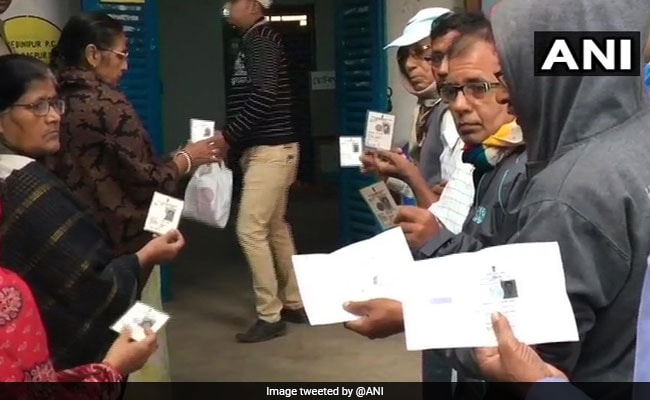 Bypolls to three Assembly seats in Bengal were held today

Bypolls to three Assembly seats took place today, exactly six months after the BJP pulled off a shock result in Lok Sabha elections in the state. After a sustained onslaught by Prime Minister Narendra Modi and Home Minister Amit Shah, the BJP tally in the state rose from 2 to 18, while that of the ruling Trinamool Congress plummeted to 22.

The three seats being voted on today are held by different parties - Karimganj belongs to the Trinamool, Kharagpur to the BJP and Kaliaganj to the Congress.

The Kaliaganj seat fell vacant after the death of sitting MLA Parmatha Nath Ray. Elections to the other two were ordered after the MLAs (Mohua Moitra of the Trinamool and Dilip Ghosh of the BJP) were voted to parliament in April-May elections.

The Left and the Congress have reached an agreement in these bypolls - the Left has fielded a candidate from Karimpur while the Congress is contesting the other two.

Although it is only three seats that are being contested, these polls are important for the Trinamool Congress.

Bengal Chief Minister Mamata Banerjee has come under pressure from a BJP that is growing increasingly influential in the state. And with 18 months to go for full Assembly elections in the state, these bypolls could indicate an early trend.

It is also a test for master poll strategist Prashant Kishor, who has been credited with YSR Congress chief Jagan Mohan Reddy's sweep in Andhra Pradesh earlier this year. After winning over 150 of 175 assembly constituencies, Jagan Reddy took power in the state for the first time.

Mr Kishor's "Didi ke bolo (Tell Didi)" campaign, which received over 10 lakh responses within a month of its launch back in August, needs to show results before state elections expected in 2021.