You Have Surname, What Else, Rahul Gandhi Was Asked In London. His Reply

In London Rahul Gandhi says, "Come to me with whatever questions you want, and then judge what I am" 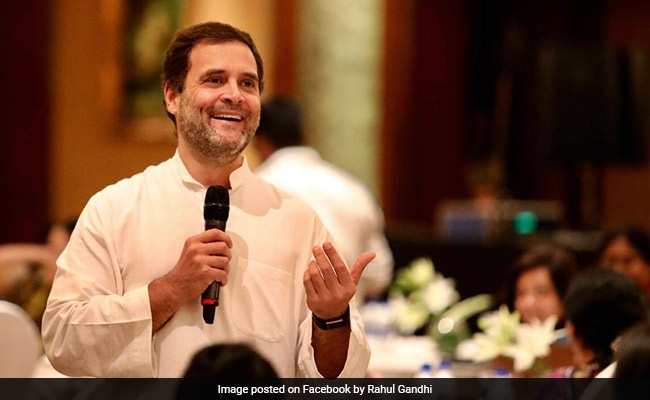 Congress chief Rahul Gandhi, who faces harsh criticism at home about his privileged background, has told journalists in UK that he should be judged by his capability and not be "condemned" for his family. Mr Gandhi had earlier said he could not be singled out for criticism for dynastic politics, telling a gathering in the US last year that it was a "problem in all political parties" and "that's how India works".

During his two-day visit to the UK, asked what he brought to the job apart from his surname, Mr Gandhi told journalists that he should not be judged without a hearing.  "At the end, it's your choice. Do you condemn me for the family I come from, or do you judge me based on my capability... that's your choice. It's up to you, not me," said Mr Gandhi said.

"Second, yes I am born in a family... listen to what I am saying, talk to me about issues, talk to me about foreign policy, economics, Indian development, agriculture openly and freely. Come to me with whatever questions you want, and then judge what I am," the Congress chief said.

The 48-year-old, who took charge of the party from his mother Sonia Gandhi last December, also took a dig at the BJP and Prime Minister Narendra Modi, his harshest critics at home.

"It is interesting to me that the Prime Minister of India struggles to have this type of a conversation. He can't sit here. He has never done it. And a large part of it, frankly is understanding of issues," said Mr Gandhi, who recently made headlines with his unexpected hug to the Prime Minister in Parliament, accompanied by the declaration that despite all the attacks and pejoratives, he does not hate the Prime Minister.

The BJP's ideological mentor, the Rashtriya Swayamsevak Sangh, he said, "helped" him tremendously in developing as a political leader "by relentlessly attacking" him on every front.

"I have been working for 14-15 years in the political system. I have taken a beating and have learnt a lot. I am person who listens, respects other people's ideas. The most important thing to me is that I see through hate. And I really think, I am proud of that," he said.

Comments
Rahul Gandhi In Londonjudge me by my capability