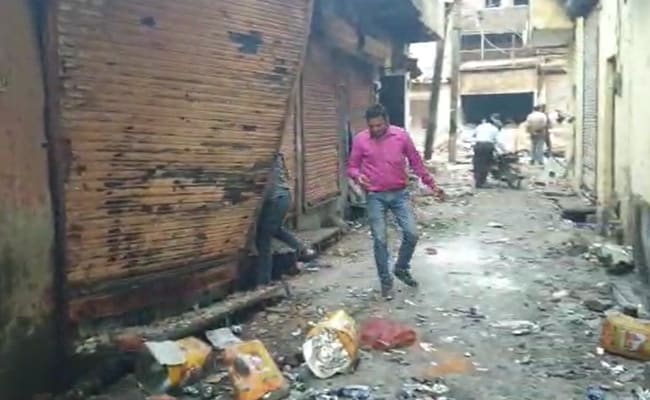 Around 50 people, most of them Muslims, died in the riots that swept northeast Delhi in February.

The Delhi Police-- criticized for not taking action against BJP leaders who gave inflammatory speeches in the run-up to the February riots -- have also ignored complaints that accused BJP leaders.  No action has been taken in at least eight complaints, accusing BJP leaders of inciting mobs and rioting, NDTV has found. No First Information Repot has been filed in four complaints. The rest have been linked to cases that have no connection with the complaints.

Sectarian riots tore through northeast Delhi in late February this year, killing around 50 people, most of them Muslims, and injuring many more. Hundreds of homes and shops were destroyed.

No FIR has been filed in at least four complaints even after more than 100 days. One of them names Kapil Mishra, filed by Mohammed Jami Rizvi on February 24,.

In his complaint he says on February 23, Kapil Mishra came to Kardampuri in northeast Delhi at the site of a protest against the controversial Citizenship Amendment Act. He was accompanied by people carrying guns, swords, tridents, sticks, stones, bottles etc.

"Protestors will now have to be taught a lesson," Kapil Mishra was quoted as saying in the complaint. His supporters stopped cars, identified Muslims and people from the Scheduled castes, and started attacking them and damaging their cars, all in the presence of the police, the complaint further said.

Another complaint filed on March 17, by Mohammed Ilyas, says he too saw Kapil Mishra and his companions go on a rampage on February 23.

"I saw Kapil Mishra myself, he had sticks in his hands. He was inciting people, and hitting cars. This happened on the 23rd (of February)," he said.

He also alleges that he saw a man called Chawla take part in the rioting, and while looting a mosque, Chawla allegedly dialled BJP's Baghpat MP Satyapal Singh and
connected him to the police officer present.

"SHO sir kept talking to him saying 'si,r sir'. And then he (Chawla) said take all this money from the cupboard to the MP. His (the MP's) boy will meet you in Baghpat," Mohammed Ilyas said.

A third complaint in which any FIR is yet to be filed, was filed by Roobina Bano on March 19. She alleged that she saw people who were with Karawal Nagar MLA Mohan Singh Bisht during the election, arrive at the anti-CAA protest site at Chand Bagh, heavily armed.

In her complaint she said she saw the Station Officer of Dayalpur hand over a phone to the ACP, saying that Kapil Mishra is on the line and that while hanging up he said, "Don't worry. We will scatter their corpses, generations will remember it". She also said when she went to file a complaint, the police threatened to file a case against her instead.

In four other cases, the complainants were told that their complaint has been attached to another FIR, which have little to do with their own cases. These complaints name Kapil Mishra, former Mustafabad MLA Jagdish Pradhan, and those linked to the Rashtriya Swayamsevak Sangh, the BJP's ideological mentor.

Nisar Ahmed had filed a complaint on March 19, alleging that he saw Kanhaiya Lal, a local BJP councillor, giving provocative speeches on February 24 along with a person called Mukesh.

"Mukesh Masterji and Kanhaiyalal gave speeches. They were saying 'Come Hindus. Wake up Hindus. Bring guns, bring all your weapons. All arrangements have been made, you come with sticks'... They also said set fire to their houses. Loot their houses," he said.

Nisar Ahmed has been told that his complaint has been attached to another FIR, which does not name anyone.

Kapil Mishra, as well as police officers NDTV reached out to, did not respond to text messages and calls.

Jagdish Pradhan said it was an attempt to defame him. Mohan Singh Bisht said he was willing to resign if they can prove the allegations. Satyapal Singh said the police needs to investigate who has conspired to make them name him. Kanhaiya Lal said he was at a hospital on evening of February 24.