This Internal Combustion Engine based unmanned drone can carry four to five kilograms of payload and remain in air for 3 hours. 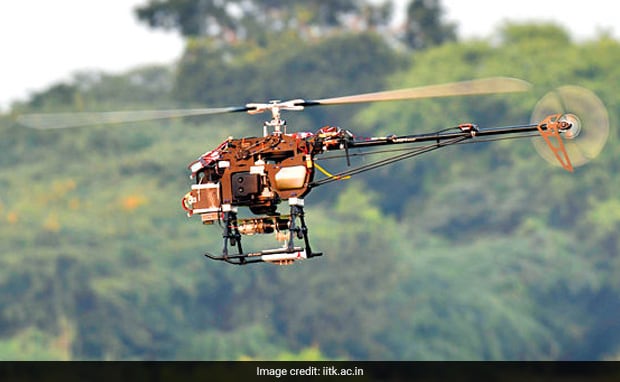 Certain parts of the drone have been manufactured by the students in their labs, IIT said

Education Minister Ramesh Pokhriyal Nishank on Tuesday congratulated the professors and students of IIT Kanpur for developing an unmanned drone, that looks like a helicopter, and said he is hopeful that the drone will be very helpful in times of natural calamities.

The minister tweeted, "Professors and students of Indian Institute of Technology Kanpur have jointly built an ultra-modern, strong unmanned drone. A few days ago I got to see this drone at the IIT campus. This innovation can certainly be very helpful in natural disasters and internal security of the country. I send my congratulations and best wishes to this entire team of IIT Kanpur."

He also shared a video made by the institute along with his tweet.

IIT professors Dr Abhishek and Dr Mangal Kothari has innovated an Internal Combustion Engine based unmanned drone that can carry four to five kilograms of payload and remain in air for 3 hours. "In cases of calamities this drone can be used to transport relief materials to the affected areas. It can be controlled by anyone with a little training since it is completely unmanned," Dr Abhishek said.

Certain parts of the drone that was not available in the country have been manufactured by the students in their labs, IIT said. The drone also was tested in Pokhran and Ladakh to ensure its effectiveness under various circumstances, it added.

"We are researching state-of-the-art auto-pilot technique to make the drone stable when it flies at high speeds through mountainous terrain or at high altitudes," Dr Mangal Kothari said.

Security forces have also expressed their interest in acquiring this drone, the institute said.