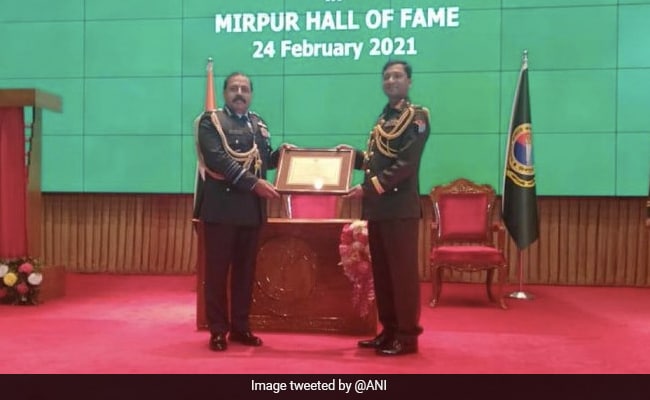 Indian Air Force Chief RKS Bhadauria, who is on a three-day visit to Bangladesh, on Wednesday, was inducted into the 'Mirpur Hall of Fame' at Defence Services Command and Staff College (DSCSC), Dhaka.

"Acknowledging the strong bonds of friendships that armed forces on both sides had forged during and after the 1971 War of Liberation, the Chiefs discussed ways to further enhance matters of bilateral cooperation," the IAF tweeted.

On Tuesday, Mr Bhadauria had paid tribute to the soldiers who laid down their lives in the 1971 Liberation War and placed a wreath at the altar of Shikha Anirban.

Mr Bhadauria and an Indian delegation also visited BAF Base in Chattogram and St Martin's Islands. He also interacted with BAF officers at BAF Base Zahurul Haq.

Mr Bhadauria is in Bangladesh on the invitation of his counterpart Serniabat to strengthen the close and fraternal ties between the Armed Forces of the two countries.

He arrived in Bangladesh on Monday.