How the MSC Chitra was finally sunk 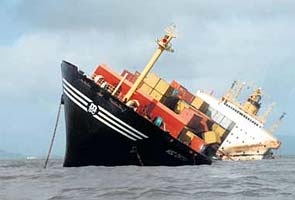 Mumbai: More than eight months after the head-on collision between two sea vessels off the Mumbai coast, which caused the damaging oil spill in the Arabian Sea, the curious case of MSC Chitra was finally put to rest on April 17 when the ship was sent sinking down to Davy Jones' Locker. That, experts said, may not be the end of the story. At the time of its submersion, the ship had over 500 cargo containers carrying tones of hazardous chemicals, diesel, lubricating oil and other fuel.

If and when the containers corrode, the fumes would fuse with seawater, spelling catastrophe for marine ecology, and others who depend on it. The extent of the probable disaster has not been assessed. Meanwhile, a team of seasoned seafarers, which has just returned to the city gave a blow-by-blow account of how Chitra was finally sunk, cargo and all, about 350 nautical miles off Mumbai's coast last Sunday, by its Panama owners.

Chitra was listing on one side after she collided with MV Khalijia III on August 7 last year. Khalijia had ripped into its port side (left), creating three major dents in its hull. The engine room of Chitra gradually flooded and the rough seas were forcing out oil from the ship's bilge. As threat of environmental disaster loomed large, the Indian Navy and Coast Guard stepped in.

After a long-drawn litigation to establish who was responsible for the calamity, Chitra was given a clean chit and was free to sail. But the owner had more problems to face. The vessel was damaged, and still had over 500 containers of polluting chemicals. It was impossible to get it afloat.

After that, said insiders, an effort was made to sell the ship to breakers at Alang in Gujarat. But the company, or any other for that matter, did not want to touch it. The vessel still held 500 containers with poisonous fumes, a potential danger for the workers who would shred the vessel to pieces. The ship breakers explained that they would have to buy very skilled labourers with oxygen masks and other equipment to protect them against the chemicals. That would make the deal exorbitant. Nobody would buy scrap at that price.

All the while, Panama-flagged Chitra was anchored 30 nautical miles north west off Mumbai. Until the Indian authorities obtained permission from its host country to sink it, four tugs hired to keep her afloat were severely denting the pockets of its owners. The owners were left with no option but to sink the ship, along with its dangerous cargo, to the bottom of the sea. A US company (name withheld) specialising in sinking vessels was hired early this month.

A towing company with powerful tugs began its operation to haul it out to the deep seas on April 13, when Chitra began her last journey from Mumbai harbour, being towed deep into the Arabian Sea. A seasoned seafarer said, "Chitra barely managed to remain afloat in the high seas as she was being towed away from the city's shores." The company decided to drown the ship about 350 nautical miles off the city, in international waters outside the bounds of Indian agencies.

A team of maritime experts boarded Chitra and opened the engine room valves. A few other holes were made in the ship's hull before water started gushing in. "Initially Chitra began listing on one side. It took 36 hours before the vessel disappeared from the horizon with a very huge splash," recalled one of the officers.

Deputy Commissioner of Police (Port Zone) Khalid Qaiser, who was investigating the case, told MiD DAY that he would have the matter looked into. Director General of Shipping Satish Agnihotri had earlier told this reporter that the country where the ship is registered, Panama, would take the decision, and that they have no say in the matter.

Promoted
Listen to the latest songs, only on JioSaavn.com
It is still not clear whether Chitra's sunken cargo poses environmental threat to the eco-sensitive ocean bed. The wreckage could be hazardous for ships plying in the area. There are about 200 species of marine life in and around the coast of Mumbai. Much of the marine life is already at peril, and the spillage of hazardous chemicals and oil will hasten the process of devastation, environmental experts said.