Jammu and Kashmir top cop SP Vaid did five push-ups to prove that he is fit to lead a force of 80,000 men. He in turn challenged his entire force and asked them to respond to the PM's challenge. 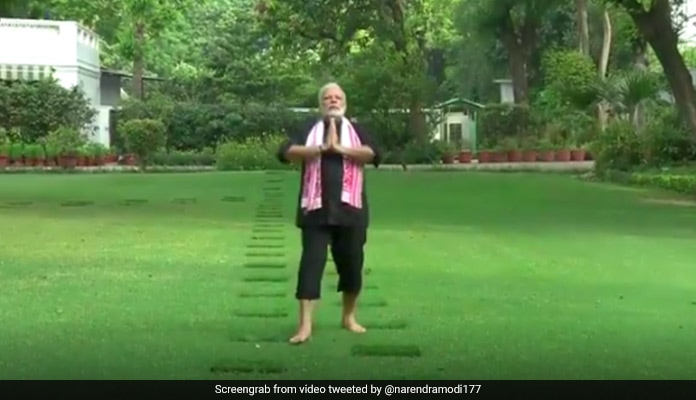 "I am delighted to nominate... the entire fraternity of brave IPS officers, especially those above 40," PM Modi said. The tweet went viral among the forces and all rank officers kept discussing it through the day.

Here are moments from my morning exercises. Apart from Yoga, I walk on a track inspired by the Panchtatvas or 5 elements of nature - Prithvi, Jal, Agni, Vayu, Aakash. This is extremely refreshing and rejuvenating. I also practice
breathing exercises. #HumFitTohIndiaFitpic.twitter.com/km3345GuV2

"Exercise has been routine for me for last 30 years. I feel mentally great if I do my work out," BK Singh, Inspector General Moradabad, a 1994 batch officer from Uttar Pradesh, told NDTV.

According to him, an officer who is physically fit can motivate his men to remain fit too. "To remain fit you have to love your body and a healthy body keeps ones heart and other organs healthy," he reasoned. BK Singh was posted with the Home Ministry before he was transferred to Uttar Pradesh, his parent cadre.

Incidentally, just after the PM tweeted, OP Singh, Director General of Police UP, asked his force to lead towards a fitter India. "I accept your challenge sir and I pass on this challenge to all IPS officers in UP," he tweeted.

The IPS Association tweeted, "policing requires high levels of physical and mental fitness. We welcome challenge by Honourable PM. While 40+ amongst us count many athletes its added motivation for the IPS to invest some time for good health in midst of unending demands of policing".

The trend grew by the evening. Jammu and Kashmir top cop SP Vaid did five push-ups to prove that he is fit to lead a force of 80,000 men. He in turn challenged his entire force and asked them to respond to the PM's challenge. PM Modi also retweeted Mr Vaid's video.

The effort, though, was not appreciated by everyone. "What is so great about it? Men in uniform are supposed to be fit," said a senior police officer sarcastically.

According to him, fitness level is not judged by uploading one minute video but by strength and your diet. "Fitness is the latest fad with upper class people," he lamented.

Some called it a diversion. "Now all will try to prove how fit they are and the ones who want to do his chamchagiri will put out their videos," one senior level official said.

There are about 4,000 IPS officers all over the country. Paramilitary accounts for about 15 lakh men and women while state police of another 25 lakh.

The Prime Minister's stress on fitness of mid-level and senior-level IPS officers comes at the back of a home ministry move to make high fitness levels mandatory for promotion of IPS officers to the level of DIG, IG, ADG and DG. 'Shape 1' fitness levels have also been made compulsory for nominating police officers for gallantry medals, though 'Shape 2' levels are allowed in exceptional cases.

Promoted
Listen to the latest songs, only on JioSaavn.com
'Shape 1' category is the highest level of fitness in terms of psychological health, hearing, physical capacity and eyesight and implies that the personnel can be posted for any duty.