How One Rajasthan Village Still Has Water Even After A Long, Dry Summer

The conservation movement that started in Laporiya has now spread to 58 villages and, in each case, is run by the villagers themselves. No government body is involved. The people build the 'chaukas', carry out maintenance and desilt channels

In the middle of the arid and dry Rajasthan landscape the village of Laporiya, located 90 kilometres from Jaipur, stands out because even at the end of a long summer its lakes hold enough water for the community's needs. In fact, Laporiya's wells never run dry and fields have moisture, even in summer, to boast grass to sustain animals.

"We never run out of water. In fact, during summer we supply water to neighbouring villages," 63-year-old Laxman Singh who, for 35 years, has spearheaded water conservation in the village, and has now started the Gramin Vikas Navyuvak Mandal, to carry forward his work.

Over the past three decades Laporiya has demonstrated conservation is possible despite increasing desertification. This is a lesson Rajasthan must learn because it has the least amount of surface water of any state in the country; it has only three per cent of India's surface water.

Even slightly below-average rainfall can send the state into a spiral of drought and water scarcity. Last year 19 of 33 districts were drought-affected.

To combat dependency on fickle monsoons, the village's "water warriors" built two-foot high "chaukas (small embankments)" all around the village, in both fields and pasture lands. These small mud walls work as water-harvesting structures by slowing down the flow of rain water and giving it enough time to seep into the ground and recharge underground water tables.

"The mud has been dug up and it creates a small catchment area. Water is collected in small quantities and then it overflows from one 'chauka' to the next, increasing ground-level moisture with repeated recharges with every spell of rain," Laxman Singh explains. 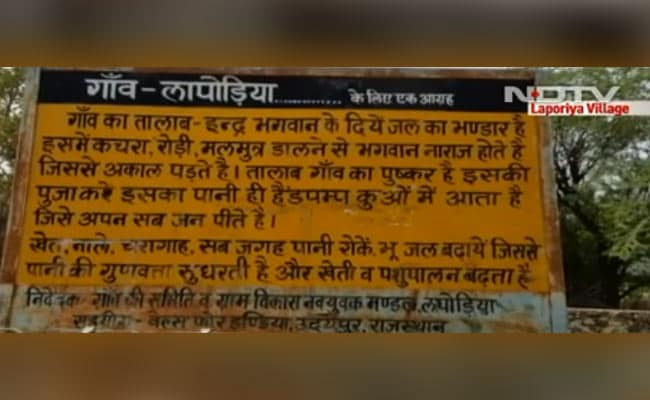 There is a rule in the village that two of three lakes are for drinking; the third is for irrigation

After recharging excess water feeds three lakes, each of which is desilted in the summer. Two of these lakes are for drinking and the third is for irrigation.

"We have made a rule in this village,"  Laxman Singh continues, adding that Anasagar (the third lake) irrigates nearly 1,400 bighas (approximately 875 acres) of agricultural land.

"This system in our village is unique, our animals never go hungry. We don't need to rush to the city for jobs, we make a living from rearing cows buffalos and even goats," Goparam, a village resident, says as his buffalos graze peacefully.

"Our job is farming and we keep animals for dairy. We easily earn more than Rs 12,000 per month and this is because we have water and rich pastures," Laxman Gujjar, a farmer, says.

The conservation movement that started in Laporiya has now spread to 58 villages and is run by the villagers themselves. No government body is involved. The people organise themselves, build the 'chaukas', carry out maintenance and desilt channels.

8 Attempts Were Made To Kill Him During Polls: Sidhu Moose Wala's Father