The eight-year-old was brutally murdered last month after she was kidnapped and allegedly held captive for a week at Rasana village. 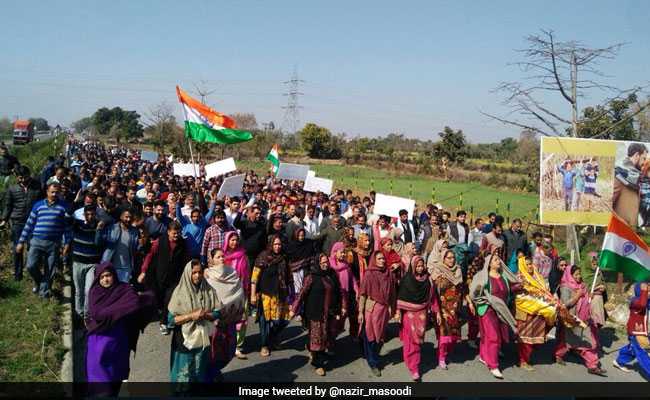 The protesters have been demanding release of accused in Kathua rape-and-murder case.

Srinagar: In the last two days, hundreds of people carrying the national flag took to the streets in Kathua district near Jammu demanding the release of the accused in the rape and murder case of a nomad girl.

The eight-year-old was brutally murdered last month after she was kidnapped and allegedly held captive for a week at Rasana village.

Referring to the protests, Chief Minister Mehbooba Mufti today called them "nothing short of desecration of national flag".

A Special Investigation Team of the Crime Branch has arrested a special police officer (SPO), Deepak Khajuria, and a juvenile for the gruesome crime.

Over the last two days, protesters, marching under the banner of Hindu Ekta Manch, were seen on the Jammu-Pathankote Highway. The protesters alleged that the Crime Branch had falsely implicated the SPO, who was part of the investigation team formed initially to trace the girl.

The protesters have threatened agitation if the accused are not released. Carrying national flags and shouting anti-Pakistan slogans, the marchers want the case to be handed over to the CBI because they don't trust the Crime Branch.

Chief Minister Mehbooba Mufti said she was appalled by these protests and "horrified" to see the use of national flag to defend the accused in the Kathua rape-and-murder case.

"Appalled by the marches & protests in defense of the recently apprehended rapist in Kathua. Also horrified by their use of our national flag in these demonstrations, this is nothing short of desecration. The accused has been arrested & the law will follow its course" Ms Mufti tweeted.

The case was handed over the crime branch following a major controversy over botched-up investigation by the local police.

The crime branch has said it would not be cowed down by these protests.

"I have already said we have clinching evidence against those who have arrested. Further investigations are on" Alok Puri, Additional, Director General of Police, Crime Branch told NDTV.

Promoted
Listen to the latest songs, only on JioSaavn.com
Mr Puri has already written a letter to the Director General of Police pointing out glaring lapses in initial police investigations conducted by police officers at the Hiranagar police station and the Special Investigation Team of Kathua police. The accused, Deepak Khajuria, was posted at the police station.

According to the investigators, the girl was raped and murdered to create fear among the members of the nomad community. The accused had chosen their target well in advance, the probe reveals.

Policy Decision To Get Best Operator At Best Price Not Unreasonable: Supreme Court