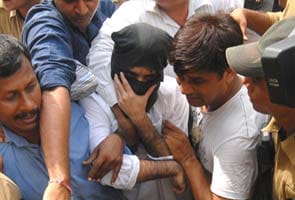 New Delhi: Heavily guarded by a team of six policemen from the Mumbai Police's Anti-Terror Squad (ATS), Abu Jundal, the 26/11 handler, was flown in to Mumbai from Delhi late on Friday night. In Mumbai, Jundal will be held under very heavy security at the Kalachowki Police Station of the ATS. The 26/11 handler is wanted by the Mumbai Police in the 2006 Aurangabad arms haul case, the 26/11 Mumbai mayhem, the 2010 German bakery blast and the Nasik recce. He is expected to be produced in a Mumbai court today.

A Delhi court had given the Mumbai Police's ATS the custody of the Lashkar-e-Taiba (LeT) operative on Friday. Jundal was brought to the Delhi court amid tight security. He was transported in a Toyota Innova, which was escorted by an armoured vehicle. In Delhi, he was guarded by Delhi police's SWAT team and CRPF commandos.

Abu Jundal has reportedly told interrogators that after 26/11, the LeT had shortlisted the Nashik Police Academy in Maharashtra as a terror target. It is a state-level training institution for Maharashtra Police personnel. The plan was to emulate the attack on the police training  academy in Lahore in 2009 -  terrorists entered the school with grenades and rockets; at least 10 people were killed over nearly eight hours as Pakistani officials fought back.

The ATS has been seeking Jundal's custody since he was nabbed by the Delhi Police. It has been directed to produce him back in Delhi once the investigation is over.

Jundal has been in custody of the Delhi Police's special cell since June 21. He was deported from Saudi Arabia to India last month and has been sharing with interrogators details of ISI officers who he says supervised the control room in Karachi from where he along with five other handlers instructed the ten terrorists on the ground in Mumbai about how to strike.

Promoted
Listen to the latest songs, only on JioSaavn.com
Earlier, the Mumbai Crime Branch had asked for his custody; sources say they want him to confront Ajmal Kasab, the lone terrorist caught alive in Mumbai during 26/11, who is kept in a bulletproof cell at Mumbai's Arthur Road jail.

The National Investigation Agency (NIA) wanted him too so they could question him about the conspiracy behind 26/11. The Pune police wants to interrogate him about his alleged link to the 2010 blast at the city's German Bakery in which 17 people died.