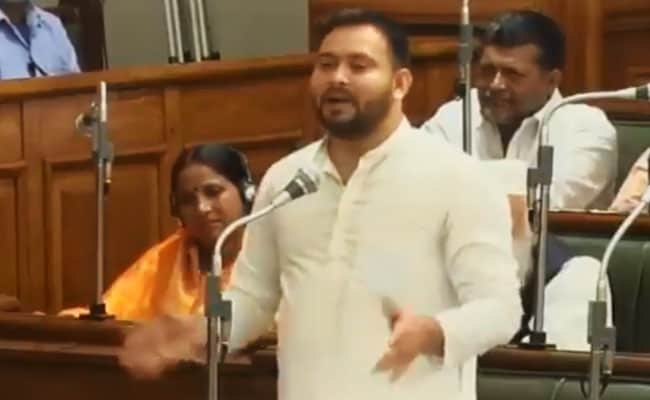 The Speaker advised Tejashwi Yadav to let go of the matter

Chaos prevailed in the Bihar assembly on Thursday after the leader of the opposition Tejashwi Yadav stormed out of the House, vowing to return only after "apology or resignation" of a minister by whom he was accused of making "misleading" statements.

The drama ended in the post-lunch session when the uproar created by the opposition MLAs caused Speaker Vijay Kumar Sinha to adjourn proceedings for about half an hour after which Mr Yadav too returned saying he wanted to show a "big heart despite being one of the youngest members".

Trouble began after Shravan Kumar, the minister for rural development, told the House in the pre-lunch session that statistics furnished by his department in response to a query by Mr Yadav with regard to MNREGA were correct and the opposition leader seemed to have come out with "misleading" figures from an unofficial website.

This led to confrontation between Mr Yadav and Mr Kumar, both of whom traded insults, even as the Speaker made it clear that personal attacks will be expunged from the proceedings of the House.

Mr Yadav whipped out his mobile phone and logged into the website which he had referred to on the previous day and, addressing the Chair, said "I have felt deeply hurt by the minister's insinuation that I have spoken a lie. I demand an apology from him."

The 33-year-old added: "We come to this House to raise the issues of the people. But if this is the attitude of the government there is no point in me being here. I shall not return to this House until the minister tenders an apology or resigns".

Mr Yadav, thereafter, left the House. Stunned by his outburst, MLAs of his party and the Left, which is aligned with the RJD, staged a walkout.

During the lunch hour, the Speaker summoned Mr Yadav and Mr Kumar to his chamber along with senior officials of the rural development department.

After the House reassembled, Mr Sinha said, "It appears that both the minister and the leader of the opposition have referred to the same website. The discrepancies in figures quoted by them could have been because of improper updating by officials concerned. Needful action has been advised."

As the Speaker proceeded, RJD chief whip Lalit Yadav said it was not proper to conduct the proceedings with the leader of the opposition in a sulk.

The Speaker asked Mr Yadav to request the leader of the opposition to come back. However, soon all opposition MLAs trooped into the well and the disruption led to adjournment of proceedings for about half an hour.

After the House re-assembled, the minister said, "It was not my intention to hurt anybody's feelings. I only wanted the leader of the opposition to acknowledge that I had not come out with a false data, as he had alleged yesterday. His allegation was reported widely in the media and presented the government in a bad light."

The Speaker again asked Lalit Yadav to request Tejashwi Yadav to return to the House. The leader of the opposition, upon return, said he was ready to let bygones be bygones but insisted that the minister admit before the House that "I had presented the data of his own department".

The Speaker, however, advised the young leader to let go of the matter and assured that the department will take corrective action with regard to compilation of data, as advised by the House.