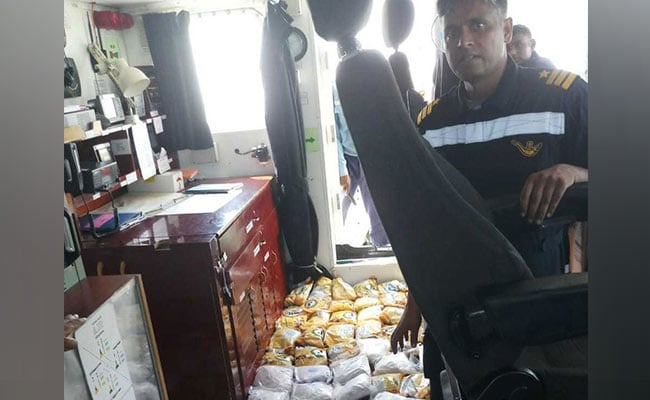 The vessel, named Al Madina, was intercepted around 9.15 am on Tuesday.

Heroin worth Rs 600 crore was seized from a Pakistani fishing vessel off the coast of Gujarat on Tuesday, the Indian Coast Guard said in a statement.

The Coast Guard intercepted the Pakistani fishing boat after a chase and found 200 kg of heroin on board.

The Coast Guard had received intelligence about a suspicious vessel "likely to be engaged in drug trafficking", it said in a statement.

A Coast Guard ship was alerted about the suspected vessel and two interceptor boats were also tasked to search and intercept the boat. A Dornier aircraft was also deployed based on the intelligence received by the Coast Guard.

During the search and surveillance, the Coast Guard found one ship to be suspicious and started shadowing it. The vessel, named Al Madina, was intercepted around 9.15 am on Tuesday.

The ship had six crew members, all from Pakistan. It has been sent to the Jakhau harbor for a detailed investigation and rummaging, the Coast Guard said.

The Coast Guard said it seized about 100 kg of heroin from a suspected Pakistani vessel off the coast of Gujarat in a similar operation in March.

Indian Coast Guard Director General Rajendra Singh said that the Coast Guard has been at the forefront in anti-narcotics and anti-smuggling operations and since inception has seized contraband worth of more than Rs. 5000 crores.