Rivaba Jadeja was the BJP candidate from Jamnagar North constituency. She defeated her nearest rival, Karshanbhai of AAP by more than 53,000 votes. 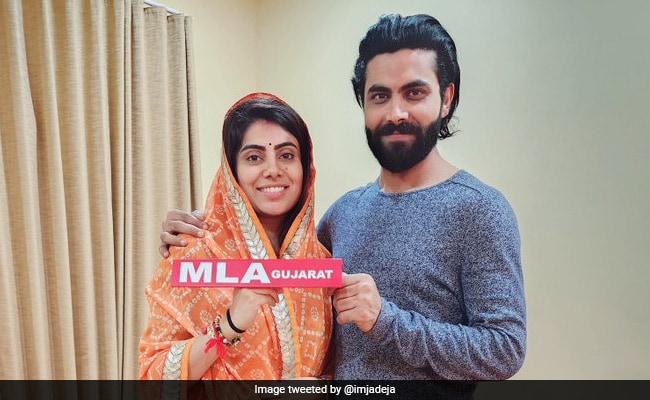 Cricketer Ravindra Jadeja has wished his wife Rivaba for winning the Gujarat Assembly election. The Bharatiya Janata Party (BJP) candidate from the Jamnagar North constituency won with over 57 per cent vote share. In a tweet, Mr Jadeja said, "Hello MLA you truly deserve it." The photo in the tweet shows Rivaba holding a small placard that says "MLA Gujarat". Rivaba defeated her nearest rival, Karshanbhai of Aam Aadmi Party (AAP) by a margin of more than 53,000 votes. Rivaba got 88,835 votes, while Karshanbhai got 35,265 votes.

"Hello MLA, you really deserve it. The people of Jamnagar have won. I express my gratitude to all the people from the bottom of my heart... the works of Jamnagar will be very good," the cricketer said, according to Google translation of his tweet posted in Gujarati.

Ravindra Jadega campaigned extensively for his wife, and even met Prime Minister Narendra Modi who visited Gujarat ahead of the first phase of Assembly elections.

After casting his vote on December 1, Mr Jadeja appealed to the voters to cast their votes in large numbers. Jamnagar North voted in the first round of the Gujarat elections.

A relative of Congress veteran Hari Singh Solanki, Rivaba Jadeja joined the BJP in 2019, three years after marrying into a family mostly of Congress supporters. Earlier, her father-in-law had appealed to people to vote for the Congress in a video that went viral. Her sister-in-law Naynaba Jadeja, a Congress leader, also campaigned for her party candidate.

Soon after her father-in-law's video emerged, Rivaba Jadeja had brushed off speculation of a feud within the family and had said her husband backed her.